Size750mL Proof80 (40% ABV)
This special Bourbon cask influence is said to develop a greater depth of sweet citrus, toasted coconut, and vanilla flavors than the signature Famous Grouse blend. It was given 88 points at the 2019 Ultimate Spirits Challenge. 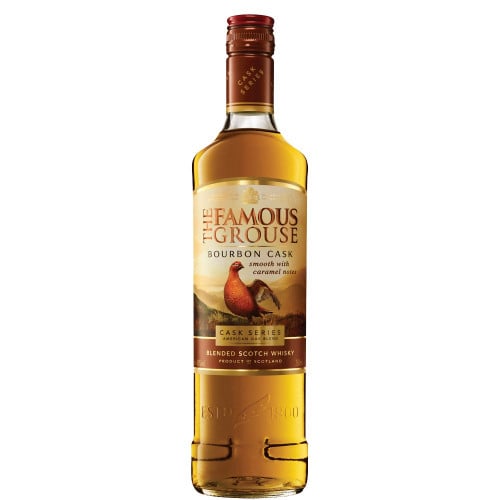 Still being firmly planted in tradition, The famous Grouse sticks to their time-honored tradition of bringing together the finest grains, pure Scottish water and carefully seasoned sherry and bourbon casks to create their uniquely rich, rounded and sweet whisky.

This whisky has been blended from whiskies matured in specially selected American oak ex-bourbon casks to deliver flavors of sweet citrus, toasted coconut, and vanilla. “The Cask Series is designed to showcase how different types of oak cask can influence flavour, delivering a range of wonderful flavours to appeal to a wide range of consumers” (Kirsteen Campbell, Master Blender of The Famous Grouse). A must-try.

Well balanced oak, sherry with a hint of citrus on the nose. The palate is medium bodied with a Speyside fruitiness, and a bourbon-like greater depth of sweet citrus, toasted coconut, and vanilla flavors. The finish is lingering and dry.