Size750mL Proof86 (43% ABV)
Made from a vatting of three different single malt whiskies, this Scotch has earned numerous accolades, including the Gold Medal at the International Spirits Competition 6 years in a row and the Gold Medal at the International Wine & Spirits Competition for 3 consecutive years.
Notify me when this product is back in stock. 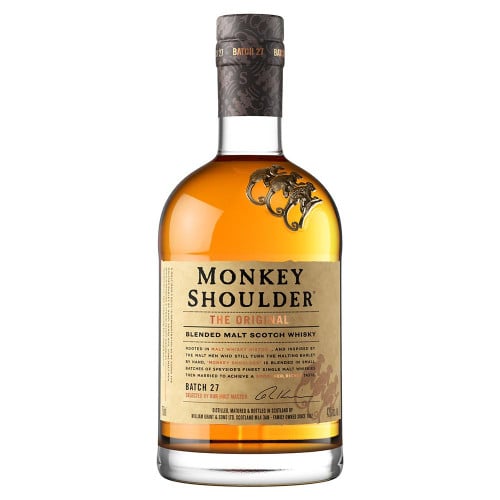 Centuries ago, distilleries throughout Scotland employed maltmen, whose job it was to hand-turn malted barley using a wooden shovel known as a schiel at the distillery's malthouse. These maltmen worked countless hours and by the end of their shifts, were often suffering from shoulder injuries, which made them feel as if there were a monkey on their shoulders. Fortunately, working conditions have improved such that the injury, which was colloquially referred to as Monkey Shoulder, has been consigned to the past.

Situated in the glen of the River Fiddich, the eponymous Glenfiddich Distillery was founded in 1886 by William Grant. Glenfiddich Single Malt Whisky is made from specially-sourced barley, which is ground into a rough flour and mashed using Robbie Dhu springwater. The grains are then fermented in tanks made of Douglas Fir. Following fermentation, the wash is twice-distilled through Glenfiddich's copper-pot stills (the distillery employs a craftsman onsite to tend to the stills, which are unique in shape and size) before the heart of the distillate is cut and prepared for aging.

Balvenie Single Malt Whisky is made using barley that the distillery grows on its 1,000 acre farm, known as Balvenie Mains. After the barley has been harvested, it is malted on the distillery's traditional malting floor with spring water sourced from the rolling Speyside hills situated above the distillery. Then, the grains are mashed and fermented, before being twice distilled through two of Balvenie's 11 copper-pot stills.

Situated adjacent to the Balvenie Distillery, Kininvie Distillery is one of the youngest distilleries in Scotland, having begun production of Scotch Whisky only 23 years ago. As a result of its location and shared ownership, much of the equipment used to produce Kininvie Single Malt Whisky is housed within the Balvenie Distillery complex, although the equipment is maintained and operated independently. To date, Kininvie Distillery has only released two single malt whiskies, and most of the whisky it produces is used for blends such as Monkey Shoulder.

After Malt Master Brian Kinsman sources single malt whisky from each of these three distilleries, he allows them to mature in first-fill Bourbon casks that are made and seasoned by independent coopers. After the whisky has matured (rumor is that the average age of the whisky is about six to eight years old), Kinsman and his assistant taste each cask individually, and select 27 casks for blending. "The key is definitely the flavor," he says. Once the casks have been blended together, the whiskies are matured together until Kinsman decides that the whisky is ready for bottling.

Pick up a unique blend of Scotch today!

Nose of butterscotch, popcorn, vanilla and honey. Slightly creamy with hints of woody spice, citrus and doughy bread. Finishes with notes of dried fruits, oak and a touch of cinnamon.