Learn more
Size750mL Proof86 (43% ABV)
Bank Note 5 Year Old Peated Reserve is a blended Scotch whisky made of 40% malt and 60% grain whiskies, aged for a minimum of 5 years in American oak. It is made by integrating a small proportion of Islay peated malt into Bank Note’s unique blend.
Notify me when this product is back in stock. 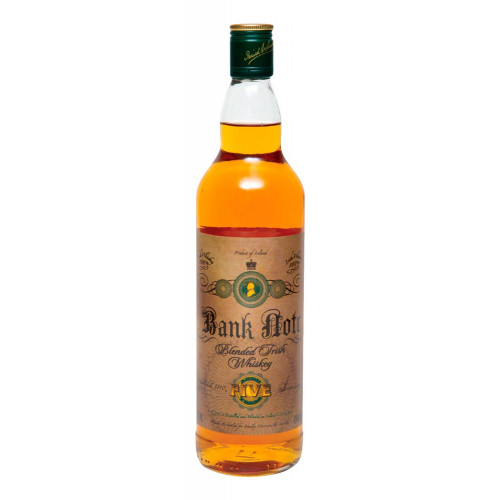 Bank Note 5 Year Old Peated Reserve is a blended Scotch whisky, with a small proportion of Islay peated malt incorporated into the Bank Note unique blend of pure Lowland grain, sweet Speyside, and robust Highland malts. The blend is made of 40% malt and 60% grain whiskies, aged for a minimum of 5 years in American oak, and bottled at 43% ABV.

Founded by Andrew Dewar Rattray in 1868, A. D. Rattray began trading as an importer of French wines, Italian spirits and olive oil. More importantly, however, the company also established itself as a specialist in the field of blending and storage of malt and grain whiskies. A. D. Rattray soon came to represent a number of well-known Highland Malt distilleries, selling bulk whisky all across the West of Scotland. Following Rattray’s death 1910 and a crisis in the industry in the 1920s, the company was sold to William Walker & Co., owned by the enterprising whisky broker William Walker. Walker’s daughter Elizabeth married Stanley P. Morrison in 1939, creating a union of two whisky-loving families. In 1949, A. D. Rattray was inherited by Elizabeth’s sister Mrs. W. E. Bruce, while Morrison formed the Stanley P. Morrison Ltd. Whisky Brokers in 1951. Stanley Walker Morrison, the son of Stanley P. Morrison, bought A. D. Rattray Ltd from his aunt in 1993. The resurgence of A. D. Rattray Ltd began with the purchase of an original bottle of Stronachie whisky at auction in 2002, which lead to the revival of this long lost whisky brand. In 2017 the Morrison’s opened the Clydeside Distillery in Glasgow, a sister company.

Today the company is led by Stanley W. Morrison as the chairman, and his son Stanley A. Morrison as the director. With the skills and knowledge passed down through the generations, the company continues to delight whisky enthusiast with its selection of Scotch whiskies. Expressions in the Bank Note line are the only blended whiskies offered by the company. Bank Note whisky was first made over 150 years ago by James Sword & Co, and A. D. Rattray recreated this iconic brand and revived part of Scotland’s whisky heritage in partnership with Pacific Edge, California.
Explore all Bank Note bottles >>

The nose is traditionally smoky with big notes of fruit and peat. The big fruity flavors of the nose carry on to the palate. The palate is smoky and spicy.