Size750mL Proof92 (46% ABV)
Inspired by the ethereal aurora borealis phenomena, this sherried single malt received 92 points at the 2017 Ultimate Spirits Challenge.
Notify me when this product is back in stock. 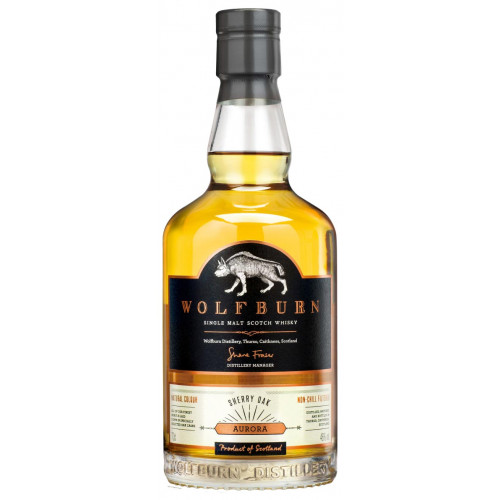 The original Wolfburn Distillery was founded in 1821 by William Smith, on the outskirts of Thurso in Caithness, Scotland. The distillery took its name from the watercourse it drew from, “burn” being the Scottish word for stream or small river. As Smith invested heavily in the distillery, it became a significant enterprise for the region — tax records for the 19th century show it was the largest producer of malt Whisky in Caithness. The distillery was kept in the Smith family until at least the 1850s, when records become scarce and it’s estimated that production began to cease (a survey map from 1972 depicts the distillery in ruin).

After 150 years of neglect, a group of private investors stumbled upon the old Wolfburn Distillery in May, 2011 — seeing massive potential, the investor began to rebuild the distillery from the ground up. The new Wolfburn Distillery, which, by law, must use water sourced from the same steam used centuries ago, is crafting unpeated malt Whisky from a blank canvas through old-fashioned pot-still distillation; no automation, no rush and a lot of care.

Wolfburn Single malt aurora is “mellow and golds, smooth and warming” (producer). Aged in a combination of American oak and Spanish Oloroso sherry casks that together create a beautifully smooth, perfectly balanced Whisky. Inspired by the ethereal northern lights phenomena, Wolfburn’s Aurora received 92 points at the Ultimate Spirits Challenge in 2017.

"“On the nose you’ll sense sherry sweetness accompanied by dried fruits and malt. On the palate there’s a warmth imparted from the sherry, augmented by autumn fruits and nutty flavours, with a hint of spice in the background – wonderfully smooth and mellow.” – Shane Fraser