Size750mL Proof80 (40% ABV)
Shackleton Blended Malt Scotch is inspired by the whisky supplied to Sir Ernest Shackleton’s 1907 British Antarctic Expedition, expertly from the finest Highland Single Malt Scotch Whiskies.
Notify me when this product is back in stock. 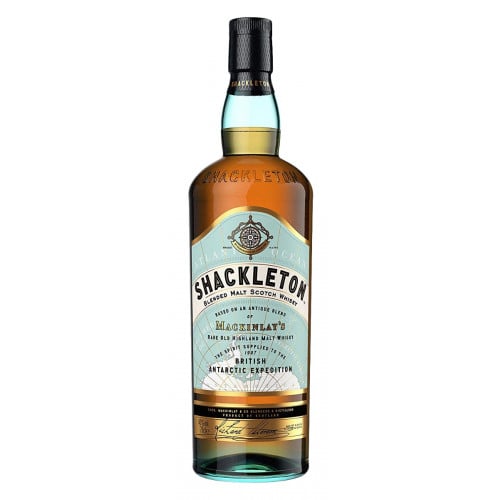 Launched by independent bottlers Whyte & Mackay this blended malt whisky is inspired by legendary polar explorer Sir Ernest Shackleton. Inspired by the three cases of Scotch discovered, frozen into the ice beneath Shackleton’s base camp at Cape Royds.

To bolster team moral on his Antarctic expedition (Nimrod, 1907), Sir Ernest Shackleton brought aboard 25 cases of Mackinlay’s Rare Old Highland Malt Whisky. The case was discovered in 2007 a century later, the 11 bottles perfectly preserved. The bottles were excavated and flown to New Zealand where they were carefully thawed by the New Zealand Antarctic Heritage Trust. The whisky is now on display at the public gallery at Canterbury Museum.

World-renowned Master Blender, Richard Paterson meticulously analyzed the antique whisky to re-create the Shackleton spirit, using it as the foundation of this modern whisky. After much scientific analysis of the salvaged bottles, it was discovered that the original Mackinlay’s was actually a single malt distilled at Glen Mhor in Inverness, matured in American oak Sherry casks and bottled at 47.3% ABV. The whisky has a subtle smoky character from the use of Orkney peat to dry the barley.

This Shackleton whisky is comprised of a selection of Highland single malts, which were married in a combination of ex-bourbon American white oak barrels and Spanish Sherry butts. The result is a beautiful reenactment, with subtly peaty notes and a rich complex flavor profile of smooth vanilla, glazed fruits and a whisper of bonfire smoke.

Smooth vanilla, toffee, apple pie and ginger on the nose. The palate is decadent with dark sugar, sweet dried fruit, glazed pineapple, hot mulled wine, and chocolate followed by a final whisper of bonfire smoke on the finish.