Size750mL Proof83.8 (41.90% ABV)
The second coming of Jane Walker, continuing the recognition of women who lead the way and Johnnie Walker's nod to suffrage across the globe. 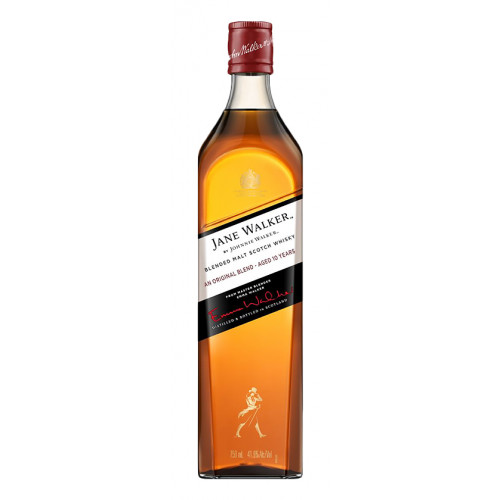 Upon his father’s death in 1820, a young grocer named Johnnie Walker invested his £417 inheritance into a grocery and spirits shop on High Street in Scotland. While Walker himself was a teetotaller, he sold a popular single malt whisky under the name Walker’s Kilmarnock Whisky. When Walker retired from the store in the 1850s, whisky sales represented just 8% of the store’s business.

In 1857, Alexander Walker — Johnnie Walker’s eldest son — inherited the store and began improving its selection of single malt Scotch whiskies. In addition, Alexander had apprenticed with a tea merchant in Glasgow and there, had learned the art of blending tea. Under his stewardship, the House of Walker began blending whisky and bottling it in an iconic, square bottle adorned with a slanted label. By the time Alexander Walker retired in the 1880s, whisky sales represented over 95% of the store’s business.

For over a century, Johnnie Walker has celebrated taking steps forward with the message of “Keep Walking” and their Striding Man icon. In recognition of women who lead the way, Johnnie Walker is unveiling Jane Walker, the first-ever female iteration of the brand’s iconic Striding Man logo. Jane Walker is the celebration of the many achievements of women and a symbol of empowerment for all those on the journey towards progress in gender equality. The story of this updated version dates back to the late 1900s when matriarch Elizabeth Cumming successfully ran the Cardhu Distillery. Ever since selling it to the Walkers in 1893 the Cardhu single malt has played a crucial role in the creation of many a blend by Johnnie Walker. Jane Walker is no exception. Matured for at least 10 years, this blended malt comes from Master Blender Emma Walker.