Size750mL Proof92.6 (46.3% ABV)
Coming from the remote Bunnahabhain distillery on the shore of the Sound of Islay, Stiùireadair, meaning helmsman, is a single malt Scotch whisky, matured in first and second fill sherry casks.
Notify me when this product is back in stock. 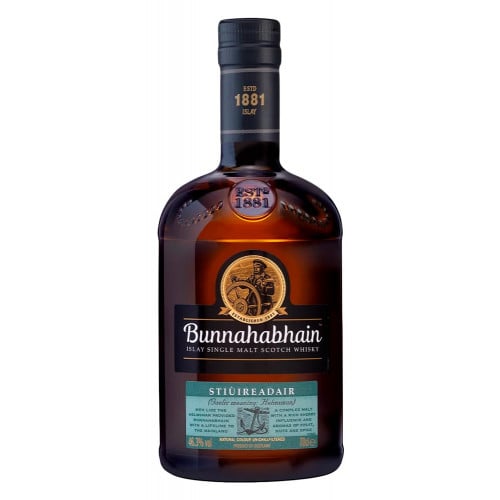 Today, Bunnahabhain whiskies are once again non-chill filtered and have a natural color at 46.3% ABV to honor the way whisky was made on-site at the very beginning. In 2014, Bunnahabhain was purchased by Burn Stewart that later merged with Distell. This brought more investment and extended the portfolio range of beloved single malts to much delight from fans and critics alike.

Bunnahabhain Stiùireadair (pronounced like 'stew-rahdur', which means 'helmsman' in Gaelic) is a single malt Scotch whisky, matured in first and second fill sherry casks, selected by Senior Blender. This single malt brings together the coastal nature and the influence of the salty sea air, combined with the sherry finish, typical for their iconic 12YO. With a complex nose and a creamy mouth feel featuring dried fruit, sea salt and caramel with a just a touch of nuts and spice, this is an intriguing expression from one of the most remote distilleries in the world that will take you on a journey to the windy shores of the Sound of Islay .