Learn more
Size750mL Proof80 (40% ABV) *Please note that the ABV of this bottle may vary
This Islay whisky is peated and matured in six different types of casks. 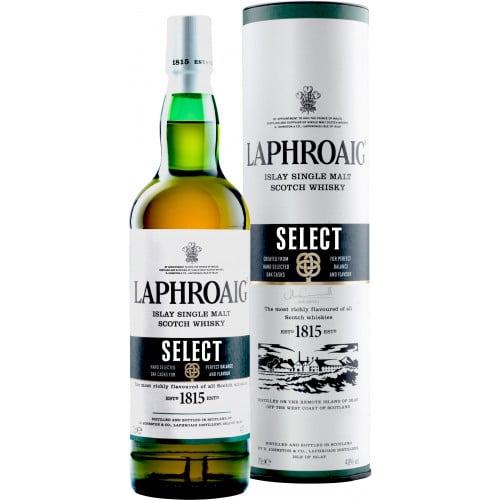 In 1815, Donald and Alexander Johnston began leasing nearly 1,000 acres of land on the island of Islay. Their intent was to use the land in order to raise and sell cattle and as a result, they began growing barley to be used as feed for their livestock. Following a particularly bountiful harvest, the brothers distilled their excess grains into whisky, and sold it to the inhabitants of the island. Soon thereafter, the brothers found it more profitable to distill whisky rather than raise cattle, and Laphroaig (pronounced La-froyg) Distillery was born.

Laphroaig Single Malt Whisky is one of the most flavorful and intense whiskies made anywhere in the world. During Prohibition, it was one of the few whiskies still legally imported into the United States, as it was considered a medicinal spirit. Laphroaig Single Malt is made from the finest Scottish barley, which is then malted at the distillery and smoked over a peat flame. Unlike other distilleries which source peat from the Scottish mainland, the peat used to smoke Laphroaig barley is made from the heather, mosses and lichens of Islay and adds a distinct iodine-like flavor to the whisky. After the barley has been malted and peated, it is fermented before being twice-distilled through Laphroaig's copper-pot stills. The unique stills have an usually flat base and flat surfaces, which contribute to the overall intensity of the whisky.

Following distillation, Laphroaig Select Islay Single Malt Scotch Whisky is matured in five different types of casks: Oloroso sherry, white American oak, Pedro Ximenez, quarter-sized and first fill bourbon. After the whisky has been matured, it is finished in virgin American oak casks, a type of wood rarely used in the Scotch whisky industry. During its time in virgin American oak, the whisky is rested in the highest, warmest reaches of Laphroaig's warehouse, which increases the exposure of the whisky to the wood.

As a result, Laphroaig Select Islay Single Malt Scotch Whisky has an aroma of peat, lemon, herbs, green apples and mint. Notes of baking spices, citrus, honey, oak and caramel are complemented by bold notes of smoke, and lead to a finish accented by touches of salty brine and rich fruits.

Aroma of peat, lemon, herbs, green apples and mint. Notes of baking spices, citrus, honey, oak and caramel are complemented by bold notes of smoke on the palate. Finish accented by touches of salty brine and rich fruits.