Size750mL Proof120.6 (60.3% ABV)
Introducing The Boss Hog Edition 六: The Samurai Scientist, the first American Whiskey finished in Japanese Umeshu Barrels, inspired by Samurai Scientist — Jōkichi Takamine.
Notify me when this product is back in stock. 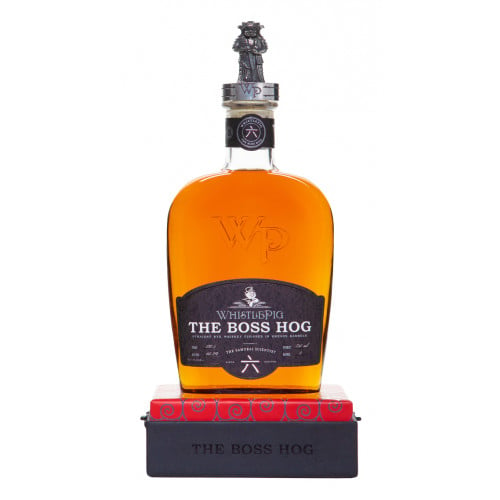 Introducing the first American Whiskey finished in Japanese Umeshu Barrels. The result of a true collaboration between WhistlePig and Kitaya brewery on Japan's Kyushu island, The Boss Hog Edition 六: The Samurai Scientist is inspired by WhistlePig’s passion for pushing the boundaries of Rye Whiskey, fusing Japanese and American techniques.

On the rare occasion that Dave Pickerell's five promises are realized, WhistlePig releases a whiskey that epitomizes WhistlePig's odyssey to unlock the potential of Rye Whiskey. This well-aged Straight Rye Whiskey was created using koji fermentation. Each bottle is adorned by The Samurai Scientist — Jōkichi Takamine — who pioneered koji fermentation in the American whiskey industry over a century ago. A true pioneer spirit, this powerfully complex single barrel rye is bottled at proof. This is an incredibly special WhistlePig release, distinctly unique from anything ever done before. Each is bottled at barrel strength, between 120 - 122 proof.

Incredibly aromatic, with cinnamon, maple syrup, and toasted marshmallow, the palate is bold, with tobacco, ginger, baking spices, and savory umami. Time in the glass and a few drops of water reveal deeper notes of rye spice, oak char and vanilla. The finish is incredibly long, with oak spice, char, and just a touch of smoke.