Rating:
100%
2
Caskers Rewards members earn up to 83 store points back when buying this bottle.

Size750mL Proof105.1 (52.6% ABV)
This expression takes its inspiration from the famous Portuguese explorer. The rye whiskey is aged 17 years with two consecutive rounds of finishing. Rare Spanish oak staves and South American teakwood add complexity to the unique barrel strength-proof spirit.
Notify me when this product is back in stock.

Caskers Rewards Caskers Rewards members earn up to 83 store points back when buying this bottle. Learn more
Out of stock
Skip to the end of the images gallery 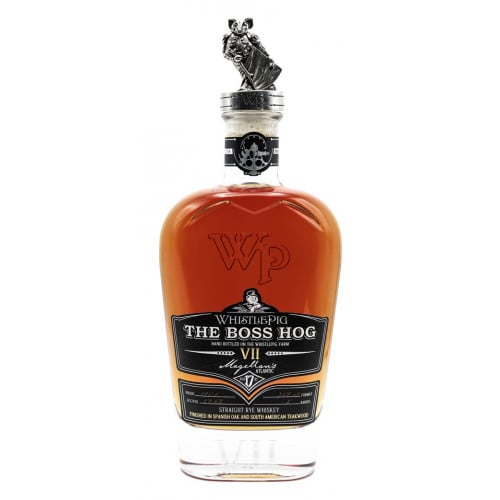 WhistlePig The Boss Hog VII: Magellan’s Atlantic is a nod to the spirit of the discovery of the Portuguese explorer. This unique single-barrel expression is a 17-year-old rye whiskey that has had two consecutive rounds of finishing after its period of aging in American oak. First are the rare oak staves from northern Spain which bring notes of cinnamon and allspice to the table. Then there's South American teakwood which adds another layer of spice and caramel, resulting in a complex, unique, and powerful rye whiskey that is bottled at barrel strength.

The nose is intense and sweet with cinnamon, allspice, maple, toasted oak, vanilla, roasted almonds, and coffee. There's spice on the palate in the form of cloves and baking spices, along with a fruity cherry sweetness, charred oak, and dark chocolate. The lengthy and slightly warm finish has lingering cinnamon and oak spice notes.