Size750mL Proof98 (49% ABV)
The 2020 edition of the annual expression celebrating the birthday of George Gavin Brown marks the 150th anniversary of Old Forester. 95 barrels of this 10-year-old were picked out, one entire day's production of their bourbon. 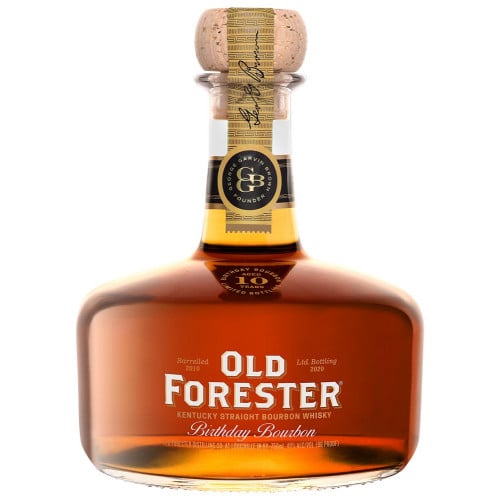 In 1870, George Garvin Brown — a young pharmaceuticals salesman from Kentucky — saw the need for a consistently high-quality whiskey that would remain unadulterated after distillation. After saving $5,500, Brown and his brother opened the doors to J.T.S. Brown & Bro. Distillery and began distilling bourbon. Unlike other distilleries at the time, Brown aged his bourbon, which was named Old Forester, in oak casks and bottled it in a sealed glass bottle to ensure authenticity and quality. Since its introduction in 1870, Old Forester has been on the market continuously, even during Prohibition, when it continued to be sold for medicinal purposes. It is the only bourbon continuously distilled and marketed by the founding family before, during, and after Prohibition.

Each year Old Forester releases a Birthday Bourbon in honor of George Gavin Brown's birthday ― September 2. This year is special, however. It's not just the 20th release in this series, but the 150th anniversary of Old Forester. The 2020 edition of the Old Forester Birthday expression had Master Distiller Chris Morris and Master Taster Jackie Zykan pick out 95 barrels, aged 10 years ― just one day's production of their bourbon, this batch being barrelled on June 5, 2010. Chosen for its unique character, the straight bourbon is bottled at 98 proof.

It's a delicately-balanced nose with floral notes, magnolia, citrus, vanilla, leather, cocoa, and spice, balanced by a brown-sugar sweetness, caramel, and a touch of tropical fruit. Caramel and toffee are on the palate with the tropical sweetness developing into banana, mango, and coconut notes with a nutty undercurrent. Finishes long and drying with a touch of anise.