Size750mL Proof90 (45% ABV)
Aged for fifteen years, this whisky earned a score of 95 points from Whisky Advocate.
Notify me when this product is back in stock. 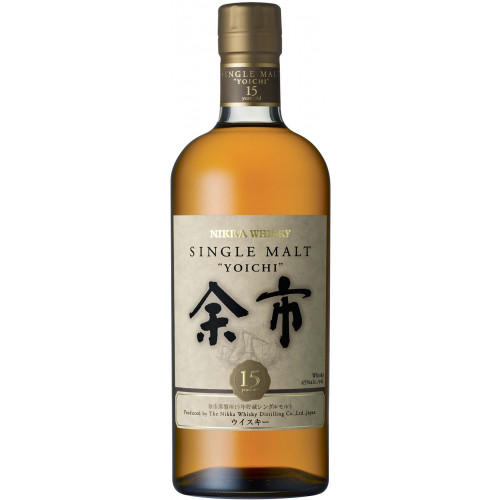 In 1895, Masataka Taketsuru — the father of Japanese Whisky — was born in the small town of Takehara, Japan. At the time, Masataka's family owned a sake brewery, and in preparing to carry on the family trade, Masataka studied chemistry and biology at Osaka Technical High School. Upon matriculation, however, Masataka showed more interest in whisky than in sake and in 1918, enrolled at the University of Glasgow, becoming the first Japanese ever to study the art of whisky-making.

While in Scotland, Masataka took chemistry courses during the day while apprenticing with distilleries at night, learning to distill and blend whisky first-hand at some of Scotland's most prestigious distilleries. In 1920, Masataka returned to Japan, and within the decade, had produced the country's first single malt whisky.

Deeming the terroir perfect for whisky production, Masataka moved to the town of Yoichi in 1934 and opened the doors to Nikka Whisky Co. Yoichi is encapsulated by mountains (to the east, south and west) and by the Sea of Japan (to the north), creating a unique and isolated environment for whisky-production. The clean air, humidity and access to underground water filtered through a layer of peat results in a rich and masculine malt. Years later, Masataka established the Miyagikyo Distillery, which is also situated in northern Japan. Surrounded by mountains and two rivers, the Miyagikyo Distillery produces a more mild and feminine whisky as compared to Yoichi.

Yoichi 15 Year Old Single Malt Whisky is a single malt whisky produced exclusively at the Yoichi Distillery. The aroma and delicate body of the whisky are a product of direct-heating distillation (meaning that the pot stills used during distillation are heated with finely powdered natural coal rather than an electrical source), a method that was used centuries ago but is hardly ever used today. After distillation, the whisky is aged for 15 years in a rickhouse just one kilometer from the Sea of Japan, resulting in a hint of crisp saltiness.

Yoichi 15 Year Old Single Malt Whisky earned the Gold Medal at the International Spirits Competition in 2010 and a score of 95 points from Whisky Advocate.

Gentle and creamy nose with hints of caramel and nuts. Palate with sweet, with notes of dried fruits (particularly apples and peaches) and warming notes of spice. Finish is long and beautifully bittersweet.