Learn more
Size750mL Proof100,4 (50.2% ABV)
Released in 2009, the 4th release in the Master's Collection was aged 7 years in new charred American oak before being finished for 8 months in well-seasoned oak casks that were air-dried for 3 to 5 years.
Notify me when this product is back in stock. 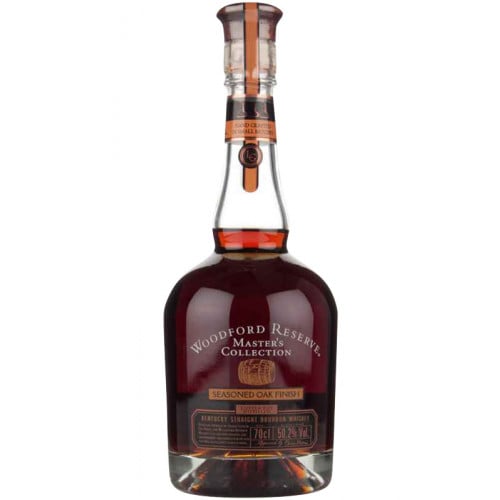 Produced under the Brown-Forman Corporation, Woodford Reserve Bourbons are premium spirits crafted in small batches and aged in new char oak barrels. This artisanal process allows them to “craft using all five sources of bourbon flavor, giving it its distinct taste and crisp, clean finish.” Woodford Reserve’s Distillery houses an impressive 500-foot-long gravity-fed barrel run, along with their iconic copper pot stills, and 100-year-old cypress wood fermenters. Their facility also has one of the only heat-cycled barrelhouses in the world. An impressive mechanism that gives Woodford Reserve its color and signature flavor.

The fourth release in the Woodford Reserve Master's Collection was released in 2009. This expression was aged 7 years in new charred American oak before being finished for 8 months in well-seasoned oak casks that were air-dried for 3 to 5 years ― many times more than is usual. The whiskey was bottled at 100.4 proof.

The whiskey opens sweet with complex aromas of oak spice and wood. The palate is complex and sweet with caramel, toffee, dark fruit, and hints of nuts. Vanilla, clove, cinnamon, and hints of tobacco follow, culminating in a complex finish with lingering notes.