Size750mL Proof124 (62% ABV)
This expression is a blend of malt (33%) and grain (66%) Irish whiskeys that spend 6 months in bourbon casks after being blended, letting the aromas and flavors marry. It's a powerful yet balanced spirit that's bottled at 124 proof. 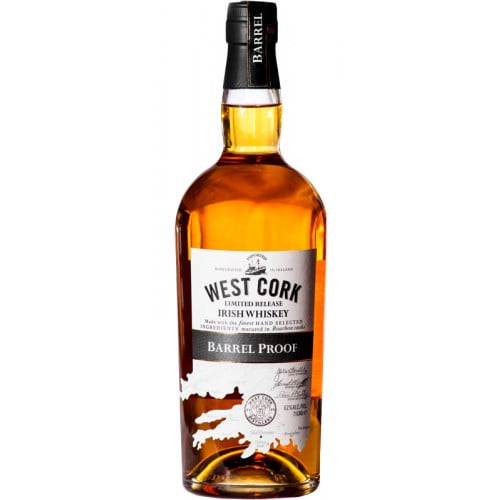 Distilled, matured, and bottled on-site, West Cork offers a diverse lineup of Irish whiskey that is triple-distilled, non-chill filtered, and crafted using local ingredients. West Cork Barrel Proof Irish Whiskey is a blended whiskey with 1/3 malt and 2/3 grain whiskey. Once these are blended, they spend 6 months in bourbon casks, letting the aromas and flavors marry. It's a powerful cask-strength whiskey that's bottled at 124 proof and has malt, dried fruit, and orange peel aromas.

Get your bottle of this powerful Irish whiskey today!

The nose opens with apple, honey, malt, and hints of vanilla. On the palate, you'll find orchard fruit, honey, almond, and orange peel, culminating in a layered finish with fruit, nuts, and malt.