Size750mL Proof86 (43% ABV)
Drumshanbo Single Pot Still Irish Whiskey is Shed Distillery’s flagship expression made using malted Irish barley, un-malted Irish barley, and Irish Barra oats. It is matured in a combination of Kentucky Bourbon or Oloroso Sherry casks for five years. This elegant and well-balanced whiskey is best enjoyed neat.
Notify me when this product is back in stock. 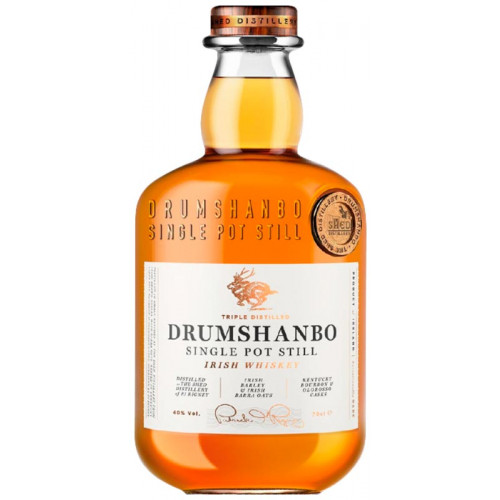 The Shed Distillery is the brainchild of PJ Rigney – a creator of new recipes, an inventor, and an experimenter, who dreamed of building his own distillery. He found the perfect location for his venture in the rural Irish town of Drumshanbo, and built an authentic distillery with 5 state-of-the-art copper pot stills, 3 of which are used in making Irish whiskey and 2 are used to distill Drumshanbo Gunpowder Irish Gin, and 2 copper column stills, which are used to produce Sausage Tree Pure Irish Vodka. On the Winter Solstice of 2014, PJ, together with his wife Denise Rigney and a dedicated team of distillers, laid down the first whiskey in the province in over a century.

Using traditional methods and experimenting with wild grains, Irish flora, and exotic botanicals, the distillery makes the finest Irish spirits. Fusing oriental botanicals with the local Irish ones resulted in the unique Gunpowder Irish Gin. Melding the time-trusted method of blending Irish malted and Irish un-malted barley with the creamy texture of Irish Barra Oats, the distillery created its truly exceptional Single Pot Still Irish whiskey, which is the first Irish whiskey from the Western province of Connacht in over 105 years.

Drumshanbo Single Pot Still Irish Whiskey is Shed Distillery’s flagship expression made using malted Irish barley, un-malted Irish barley, and Irish Barra oats, which are all milled on site. The grains are mashed with hot water sourced from a nearby aquifer at a controlled temperature for about 6–7 hours, and the resulting liquid is cooled and fermented. The wash is then triple distilled and filled into a mix of first use wooden casks that previously held either Kentucky Bourbon or Oloroso Sherry. After maturing for five years, this small-batch whiskey is blended and bottled at 43% ABV.

Toasted nuts, vanilla honey, and toffee notes on the nose are accompanied by sweet dried fruit. Creamy, full-bodied palate has winter spice, redcurrant, and coconut, which shift to notes of dark chocolate, almond, and oak. Sweet wine notes, with a slide of dry space that lingers sublimely on the palate.