Learn more
Size750mL Proof94 (47% ABV)
This whiskey was named "Best Irish Single Malt Whiskey," at New York International Spirits Competition in 2015.
Notify me when this product is back in stock. 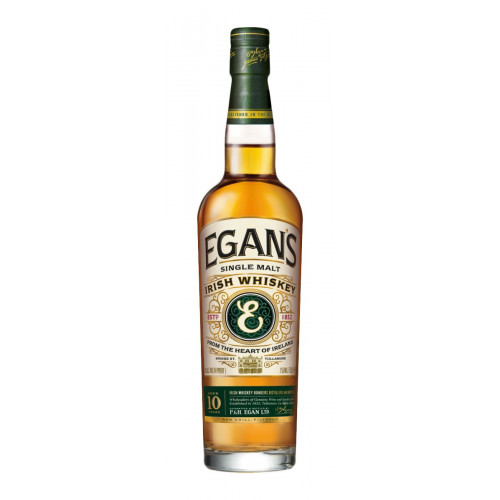 P. & H. Egan was founded by Patrick Egan in 1852, in Tullamore Ireland. The brand became very successful at brewing. By the late 19th century Henry and Patrick Jr., expanded the business into one of the largest business in the area.

Along with its own brands, P. & H. Egan became bottlers for Guinness, Bass, and Jameson. Over a century later in 2013, the fifth and sixth generation of Egan’s revamped the family business, propelling the Egan name back into the world of whiskey.

This 10-year-old Single Malt is the first bottling of the modern Egan era. Named Best Irish Single Malt Whiskey at New York International Spirits Competition in 2015, this special whiskey is a creamy, complex spirit aged in ex-Bourbon casks. Distilled from 100% malted barley you can expect a rich and silky whiskey with light pot-still yet earthy flavors.

Tropical notes of coconut and pineapple, ginger, apple pie and vanilla on the nose. The palate is medium bodied with apples, banana and tropical fruits, and oak. Coconut, vanilla and ginger with oak notes on the finish.