Learn more
Size750mL Proof136 Proof (68% ABV) *Please note that the ABV of this bottle may vary
Reminiscent of classic French absinthe, Superior Absinthe Verte earned the Silver Medal at the 2011 San Francisco World Spirits Competition.
Notify me when this product is back in stock. 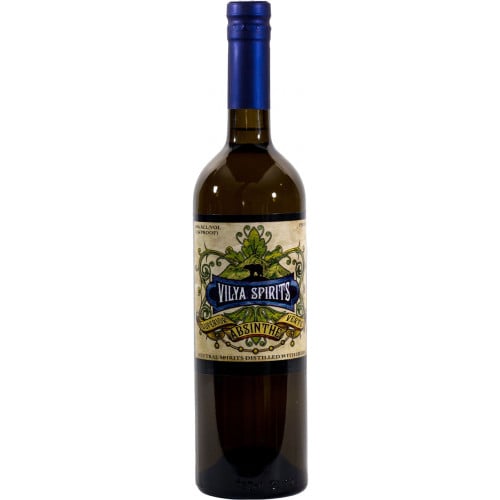 Spurred by the temperance movement and winemakers, absinthe became associated with hallucinogenic effects. One critic claimed that absinthe would "make you crazy and criminal,"and that it would "provoke epilepsy and tuberculosis." In 1905, Swiss farmer Jean Lanfray murdered his family after consuming considerable quantities of wine, brandy and two glasses of absinthe. While Lanfray had a history of alcoholism, Swiss teetotalers seized the moment and passed a referendum making absinthe illegal.

Absinthe was likewise prohibited in the United States from 1912 until 2007. During that time, Joe and Jules Legate began cultivating an herb garden on their farm in Kalispell, Montana. When they realized that many of the herbs they were growing were used in the production of absinthe, they began pouring over rare manuscripts and recipes, tasting all the absinthe they could get their hands on, before opening Vilya Distillery. After hundreds of experiments, they finally settled on the recipe for Superior Absinthe Verte

Using grand wormwood, green anise, fennel, coriander, angelica, elecampane, melissa, and Roman wormwood, the Legates still source most of their ingredients from their 15-acre farm — the alpine climate, they argue, makes some of the best herbs. Once the herbs have been harvested, they are blended with a pure grain spirit and Rocky Mountain spring water and then distilled in a handcrafted copper alembic still from Portugal. Reminiscent of classic French absinthe and made with the three traditional ingredients (wormwood, anise and fennel), Superior Absinthe Verte is bottled by hand at 136 proof. Rich and herbaceous, it is spicy yet savory initially, and gives way to well-measured notes of artemisias and coriander.

Rich and herbaceous aroma, dominated by anise and a hint of caramel. When prepared traditionally with sugar and water, it shows restraint; very opalescent, very colorful. Earthy, the sweet and spicy flavors give way to slight notes of lemon and mint. Finish is long and sweet, saline and peppery.