Size750mL Proof136 (68% ABV)
After being banned in the U.S. for a century, Pernod Absinthe still follows the original recipe and processes of Henri-Louis Pernod using a secret bouquet of herbs to achieve its all natural vibrant color.
Notify me when this product is back in stock. 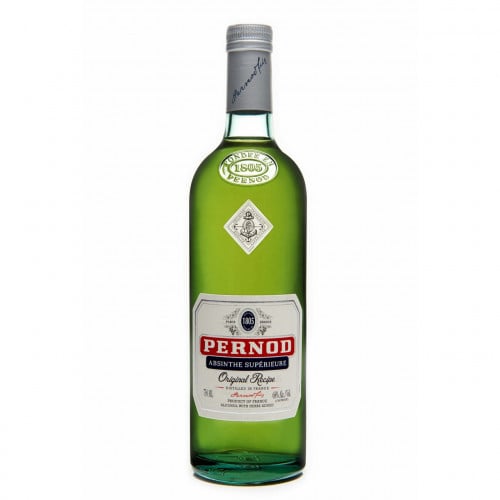 Absinthe, which is a spirit traditionally derived from wormwood, star anise and fennel, has a long and colorful history. While its origins remain unclear, the use of medicinal wormwood dates back to ancient Egypt. In the 18th and 19th centuries, absinthe was distributed by the French Army to its troops as a cure for several digestive diseases, including dysentery and tropical fever. When the troops returned home, they brought their taste for absinthe with them.

A French doctor, Pierre Ordinaire, knew of absinthe’s medical benefits, and believed there could be a business in distilling the spirit commercially for non-medical purposes. Ordinaire did not know how to distill spirits, however, and looked to 21-year-old Swiss distiller Henri Louis-Pernod for help. They set up a distillery together in 1798, and by 1805 Pernod had opened his own distillery in Pontarlier, France, exporting absinthe to the U.S. as early as 1827.

The popularity of absinthe grew, particularly among bohemian artists and writers such as Ernest Hemingway, Vincent van Gogh and Oscar Wilde, all known to be absinthe drinkers. By the mid-1800’s absinthe had established itself as a pre-dinner drink throughout parts of Europe to be enjoyed during “The Green Hour”, which referred to the spirit’s vivid hue.

Spurred by the temperance movement and winemakers, absinthe became associated with hallucinogenic effects. One critic claimed that absinthe would "make you crazy and criminal," and that it would "provoke epilepsy and tuberculosis." In 1905, Swiss farmer Jean Lanfray murdered his family after consuming considerable quantities of wine, brandy and two glasses of absinthe. While Lanfray had a history of alcoholism, teetotalers seized the moment and passed a referendum making absinthe illegal; it was not until 2007 that absinthe was allowed to be legally sold again.

Pernod Absinthe is still produced following the traditional processes that were used in the original distillery of Henri-Louis Pernod. Local wormwood and the green anise are distilled after maceration in a neutral wine spirit base. Following distillation, the “heart cut” is macerated again in star anise, Melissa, petite wormwood, hyssop and a mixture of herbs kept secret by the distillery in Thuir, France that give the spirit its beautiful green color.

Long floral notes linger on the nose followed by a palate of star anise, vanilla and hyssop. The finish is slightly spicy with a hint of wormwood.

Long floral notes linger on the nose followed by a palate of star anise, vanilla and hyssop. The finish is slightly spicy with a hint of wormwood.