This product is available in: CA, CT, DC, FL, NH Unfortunately, we can't ship to PO Boxes and APO addresses.

Size750mL Proof106 (53% ABV)
Coming from the birthplace of absinthe, Kübler Absinthe is made with original recipes dating to 1863. Made with 9 botanicals, this is a white absinthe, which means it's clear instead of green.
Notify me when this product is back in stock.

This product is available in: CA, CT, DC, FL, NH Unfortunately, we can't ship to PO Boxes and APO addresses. 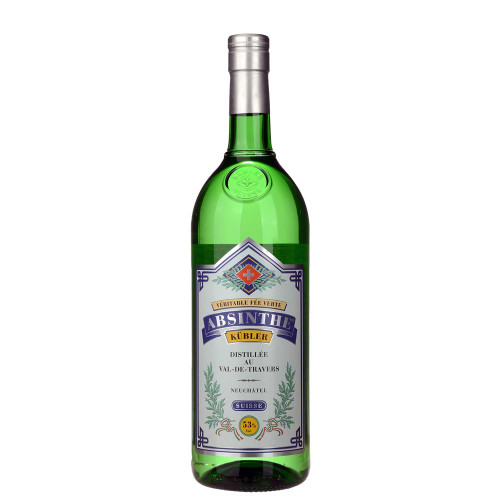 Absinthe might be most commonly associated with The Belle Époque in France, but it was actually invented in Switzerland, namely in Val-de-Travers, a long valley close to Lake Neuchâtel, west of Bern.

One of the most renowned absinthe brands is Kübler Absinthe, a traditional Swiss style of absinthe that was founded by J. Fritz Kübler in 1863 in Môtiers, Switzerland — the capital of Val-de-Travers. Kübler eventually built his own distillery called the Blackmint Distillery. Unfortunately, absinthe was banned from the beginning of the 20th century due to the wormwood compound. With Kübler's family recipes dating back to 1863, Fritz's grandson Yves Kübler lobbied to change the laws and restore legality of absinthe in Switzerland. He was successful and in 2001, the ban was lifted while in 2005, all anti-absinthe laws were repealed. Yves Kübler built a new distillery close to the original one where Kübler absinthe is produced with time-honored methods and recipes.

Clear and almost odorless. Sweet palate with distinct flavors of anise, licorice, and wormwood. A sweet and medium finish.