Size750mL Proof106 (53% ABV)
This clear absinthe is crafted in the birthplace of the (in)famous spirit ― the village of Couvet in Switzerland. With the recipe dating back to 1935, this was one of the first clandestine absinthes to go legal after the ban was lifted.
Notify me when this product is back in stock. 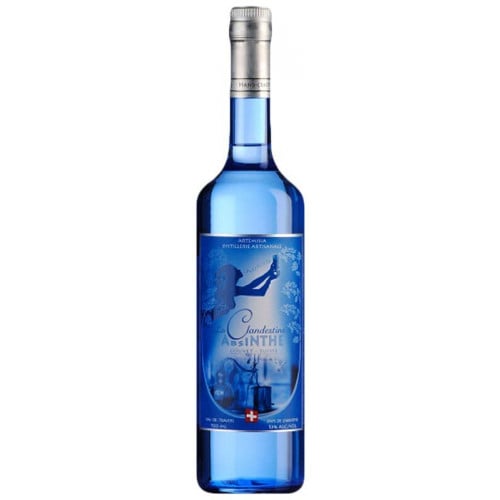 The origins of absinthe can be traced back to the 18th century when pioneers began distilling the famous spirit in the small village of Couvet in Switzerland. The area and its terroir are perfect for growing the numerous plants used in its distillation, especially grande wormwood ― a key ingredient. The 19th century saw the rise of absinthe before facing bans around the globe in the 20th century due to smear campaigns of the wine industry painting it as an evil, violent drink of criminals. It was during this time that clear Swiss absinthe came to be, as it was easier to smuggle in this form.

Claude-Alain Bugnon had worked in the oil business before finding an interest in absinthe. Distilling his first "bleue" or colorless absinthe in a 12-liter pot in 2000, his hobby started getting more and more serious. He was eventually given the recipe of well-known distiller Charlotte Vaucher from 1935, which prompted him to upgrade the equipment in order to distill this rich and pleasantly bitter version. In 2004, as the ban on absinthe was getting lifted, Bugnon started the process of acquiring a license for distillation ― the first clandestine distiller to do so. With the ban lifted after nearly a century, his Artemisia distillery soon took off, producing their first official absinthe: La Clandestine.

Produced in Couvet, the birth-place of absinthe, La Clandestine paved the way for the clear version of the spirit around the globe. Hand-crafted in very small batches using the finest plants, it's a proper distilled spirit, unlike several versions that rely on maceration. It's a 100% natural spirit with no added color that is bottled at 106 proof.

The nose is herbal with anise, fennel, verbena, and citrus. A pleasant sweetness is on the palate and the bitterness is toned down ― a common trait of clear absinthe. Herbal, wormwood, and mint notes are present and the finish isn't overly bitter as many absinthes can be.