Size750mL Proof136 Proof (68% ABV)
Distilled in accordance with a 19th century French recipe, this absinthe is the only absinthe endorsed by The French Absinthe Museum.
Notify me when this product is back in stock. 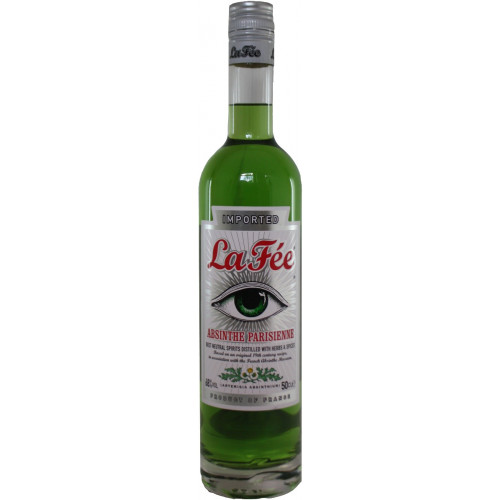 Spurred by the temperance movement and winemakers, absinthe became associated with hallucinogenic effects. One critic claimed that absinthe would "make you crazy and criminal,"and that it would "provoke epilepsy and tuberculosis." In 1905, Swiss farmer Jean Lanfray murdered his family after consuming considerable quantities of wine, brandy and two glasses of absinthe. While Lanfray had a history of alcoholism, teetotalers seized the moment and passed a referendum making absinthe illegal; it was not until 2007 that absinthe was allowed to be legally sold again.

La Fée Absinthe Parisienne is distilled by the Cherry Rocher Distillery in conjunction with Marie-Claude Delahaye, the world renowned absinthe expert and historian. "La Fée captures the aroma and taste that great writers and artists such as Rimbaud, Toulouse-Lautrec and Vincent van Gogh enjoyed at the end of the 19th century," says Delahaye.

The absinthe is distilled in accordance with a 19th century French recipe that calls for nine unique herbs and spices: grand wormwood, petite wormwood, fennel, green anise, star anise, hyssop, coriander and two secret ingredients that remain a closely-guarded secret. The ingredients are macerated together with a beet-based spirit inside a copper-pot still, before the absinthe is brought to proof with demineralised water.

La Fée Absinthe Parisienne has a rich, green color along with an aroma of spicy herbs, anise, fennel and fresh grass. With the addition of water, the aroma gives way to notes of liquorice and mint and ends with touches of herbs, anise and root. The absinthe earned five stars from the Difford's Guide, which called it "Excellent." It also earned the Gold Medal at the San Francisco World Spirits Competition in 2008 and the Los Angeles International Wine and Spirits Competition in 2009.

Rich, green color along with an aroma of spicy herbs, anise, fennel and fresh grass. With the addition of water, aroma gives way to notes of liquorice and mint. Ends with touches of herbs, anise and root.