Size750mL Proof136 (68% ABV)
Crafted from a century-old recipe, this absinthe earned a score of 97 points — the highest score of any absinthe — at the Ultimate Spirits Challenge in 2013.
Notify me when this product is back in stock. 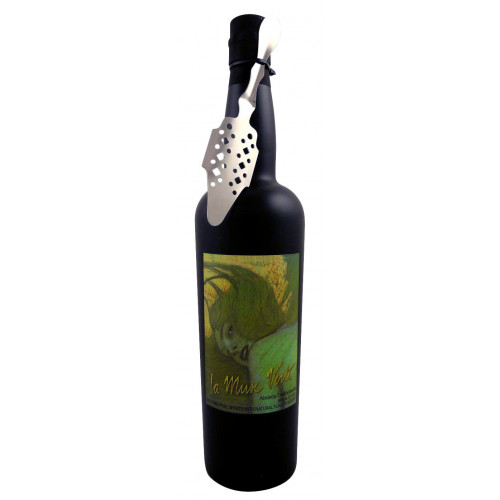 Spurred by the temperance movement and winemakers, absinthe became associated with hallucinogenic effects. One critic claimed that absinthe would "make you crazy and criminal," and that it would "provoke epilepsy and tuberculosis."In 1905, Swiss farmer Jean Lanfray murdered his family after consuming considerable quantities of wine, brandy and two glasses of absinthe. While Lanfray had a history of alcoholism, Swiss teetotalers seized the moment and passed a referendum making absinthe illegal. Similarly, absinthe was prohibited in the United States for nearly a century; from 1912 until 2007, absinthe was not allowed to be consumed on American soil.

La Muse Verte is crafted from a traditional absinthe recipe that was originally created in the late 19th century and refined over the course of the next hundred years. The recipe calls for a secret blend of up to eight different ingredients, including fresh, organic grand wormwood (the wormwood is used within a few months of harvest). After each plant used in crafting the absinthe is harvested, it is steeped in a beet-based spirit for up to three weeks in order to extract the flavors, oils and texture of the plant. After the plants have been macerated, the absinthe is married together without the use sugar, artificial additives or coloring, and bottled at 136 proof — the historical alcohol content of absinthes crafted centuries ago (the black bottle ensures that light does not spoil the color of the absinthe).

La Muse Verte has a fresh, herbal aroma with hints of grass, licorice and citrus. The aroma gives way to a fluffy, coating texture that has notes of apples, herbs and peppermint, and ends with a spicy touch. The absinthe earned a score of 97 points at the Ultimate Spirits Challenge in 2013 — the highest score of any absinthe — and was awarded the Chairman's Trophy.

Pick up a bottle of a #1 absinthe today!

Fresh, herbal aroma with hints of grass, licorice and citrus. Fluffy, coating texture that has notes of apples, herbs and peppermint, and ends with a spicy touch.