Learn more
Size750mL Proof136 (68% ABV) *Please note that the ABV of this bottle may vary
Reminiscent of traditional French absinthes enjoyed over a century ago, this absinthe pays tribute to the first and only Emperor of the United States.
Notify me when this product is back in stock.

This product is available in: IL, NV, WA Unfortunately, we can't ship to PO Boxes and APO addresses. 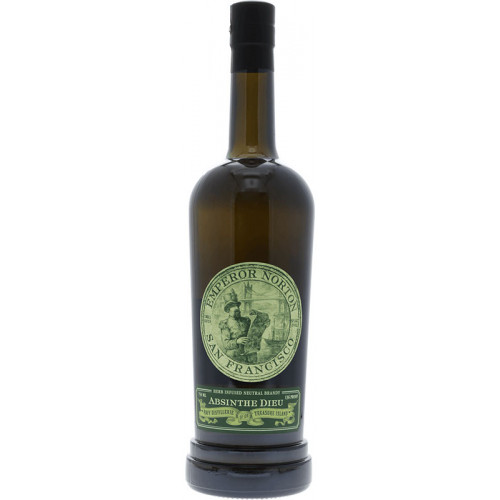 As Emperor, Norton — dressed in part Union and part Confederate attire — ordered the dissolution of Congress (if only wishing made it so) and the construction of a bridge between San Francisco and Oakland. Despite his eccentricities and psychological condition, Californians adored Emperor Norton — nearly 30,000 people packed the streets of San Francisco to pay homage to Norton upon his death in 1880.

Carter Raff, master distiller at the eponymous distillery, has been distilling spirits for nearly his entire life and began experimenting with absinthe over 25 years ago. Emperor Norton Absinthe Dieu starts with brandy made from 100% California grapes, which Raff distills with absinthe's three traditional ingredients — grand wormwood, anise and fennel seed — before adding Roman wormwood, hyssop and lemon balm. The result is an absinthe reminiscent of absinthes served in Paris over a century ago — it has woody hints of wormwood, followed by gentle notes of anise and citrus undertones. After distillation, Raff fills and labels each bottle by hand.

Woody hints of wormwood are followed by gentle notes of anise. Floral and citrus undertones balance out the notes of spice and add a hint of savory flavor.