Size750mL Proof80 (40% ABV)
This new release pays homage to the distillery’s founder, George Smith, who set out to create the smoothest of all whiskies. It’s aged in first fill American oak casks for an intensely smooth, creamy finish. 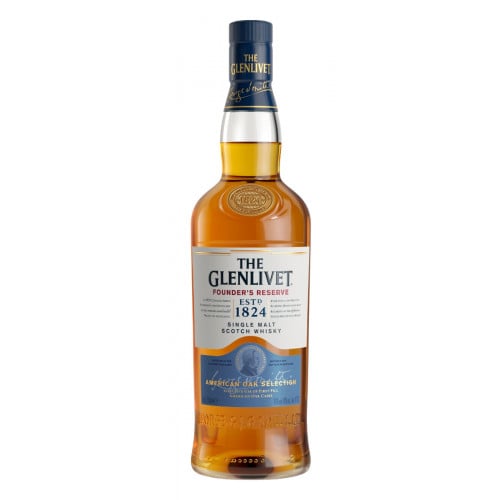 During the early 19th century, illegal distilleries were commonplace throughout the Speyside region of Scotland. In 1823, however, Alexander Gordon pushed the Excise Act of 1823 through Parliament. The Excise Act allowed illegal distillers throughout Scotland to apply for and obtain licenses to legally distill spirits. In 1824, a businessman named George Smith applied for one of the first licenses in the Speyside region of Scotland and opened the doors to The Glenlivet Distillery. For nearly two centuries,The Glenlivet Distillery has been producing the "single malt whisky that started it all."

After the barley has been fermented, it is distilled twice — first through The Glenlivet’s wash still, and then again through The Glenlivet’s spirits still. Originally designed by George Smith, the copper-pot stills have a unique, lantern-like shape, which encourages contact between the whisky and the copper. The copper strips the whisky of any impurities it may have, and provides for a lighter and more pure flavor profile.

As a result, The Glenlivet Founder’s Reserve has a pale gold color with bright notes of blood orange and burnt sugar on the nose. The palate transitions to flavors of pear, rock candy and caramel apples before finishing with notes of toffee, peanuts and honey. Easygoing yet full of flavor, The Glenlivet Founder’s Reserve is sure to be equally delicious for both connoisseurs and those just discovering whisky.

Pale gold color with bright notes of blood orange and burnt sugar on the nose. The palate transitions to flavors of pear, rock candy and caramel apples before finishing with notes of toffee, peanuts and honey.