Learn more
Size750mL Proof92 (46% ABV) *Please note that the ABV of this bottle may vary
Inspired by the legend of Machrie Moor, this is the only expression of peated single malt whisky ever created by The Arran Distillery.
Notify me when this product is back in stock. 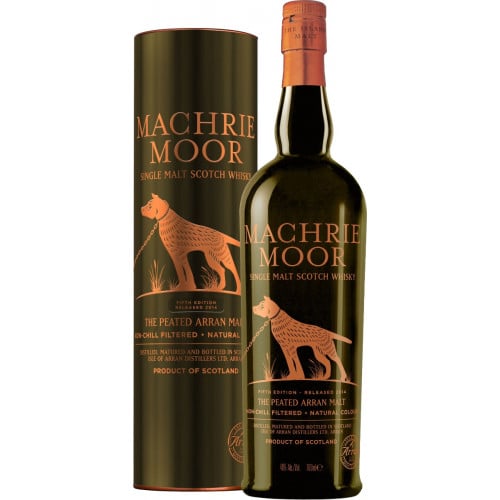 The Arran Machrie Moor Single Malt Scotch Whisky takes its name from a mystical peat bog called Machrie Moor, which is situated on the west coast of the Isle. In the bogs barren terrain, a large stone with a carved hole can be found. The stone is known as Fingal's Cauldron, and is rumored to have been the site where the legendary warrior giant Fingal tethered his favorite dog before going off to battle. The Arran Machrie Moor Single Malt Scotch Whisky captures the rugged beauty and lore of this landscape.

The Arran Machrie Moor is made from Scottish barley, which has been peated to just under 20 phenol parts per million (the other Arran expressions are crafted from unpeated barley). After the barley has been peated, it is mashed and fermented before being distilled twice — first through Arran's copper-pot wash still and then again through Arran's copper-pot spirit still. The stills were custom designed, says MacTaggart, and "shaped to allow the lighter vapors to come up through the stills." As a result, Arran Single Malt Scotch Whisky has an appreciably softer and more delicate flavor profile than other Scotch whiskies.

Following distillation, Arran Machrie Moor is matured in American oak casks that were previously used to mature bourbon. As a result, the whisky has a golden barley color, along with an aroma of tropical fruits, coconut and light smoke. The aroma gives way to notes of dark fruits, spices, honey, vanilla and peat on the palate, and leads to a smooth, crisp finish with touches of apples and cinnamon.

In addition, each bottle of The Arran Machrie Moor Single Malt Scotch Whisky is labeled with an image of Bran, Fingal's dog, tied to a stone. Unleash the legend that is Machrie Moor today!