Size750mL Proof86 (43% ABV)
This organic single malt was the first of its kind in 2006. This pioneering whiskey received 92 points at the 2014 Ultimate Beverage Challenge.
Notify me when this product is back in stock.

Notice: All images for this bottle are symbolic. If you should have any further questions about this specific bottle please feel free to contact our customer support and they will be happy to help. 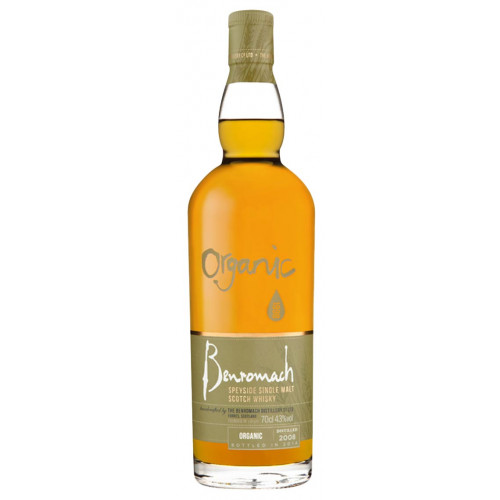 Situated on the outskirts of the ancient Royal Borough of Forres, Benromach Distillery was founded in 1898 by Duncan McCallum, a former distiller at the Glen Nevis Distillery in Campbeltown, and FW Brickman, a former spirits broker from Edinburgh. After just two short years of operation, McCallum and Brickman were forced to close the doors to Benromach Distillery and since then, the distillery has changed hands a number of times.

When first released in 2006, this Benromach single malt was the first in its class, distinguishing itself as the first Soil Association-certified organic single malt. Made from organic Scottish barley this whisky is aged in barrels made from specially selected virgin American oak. The organic single malt is non-chill-filtered and bottled at 43%. This pioneering single malt received 92 Points at the 2014 Ultimate Beverage Challenge.

Sweet and malty notes on the nose, with aromas of vanilla, toffee and banana. The palate is creamy with pepper and sweet fruit flavors, particularly ripe bananas. The finish is medium length with floral character.