Be the first to review this product
Limited to 6,000 bottles, this expression pays tribute to William McCoy's bootlegging career. The single blend of 12-year-old rums that were aged in American ex-bourbon and virgin white oak casks is bottled at 100 proof and marks the 100th anniversary of Prohibition.
$96.99
Add to Wish List

William McCoy was known as one of the original rum runners who smuggled rum into the U.S. during Prohibition. He created a reputation for not adulterating his spirits to boost his profits, like many other bootleggers. The term "The Real McCoy" was coined as a mark of authenticity. All Real McCoy rums are sourced from the acclaimed Foursquare Distillery in Barbados. Foursquare was also said to have supplied William McCoy with his rum.

With more than 100 awards worldwide, these rums are small-batch artisanally crafted by The Real McCoy’s 4th generation master distiller using only the finest molasses and pure spring water. The rum is batch distilled in a rare combination of column and artisan pot stills, then authentically aged in heavy char American oak ex-bourbon barrels. The Real McCoy Rums are "Single Blended" meaning that they come from a single estate and are a blend of heavy and light distillates from copper pot and copper Coffey stills.

Bottled for the 100th anniversary of Prohibition, the limited-edition Prohibition Tradition rum is a 100 proof expression that pays tribute to William McCoy's bootlegging run at the start of Prohibition. It's a single blend of 12-year-old rums that were aged in American ex-bourbon and virgin white oak casks. Mature, elegant, and complex, this release is limited to a scant 6,000 bottles.

Pick this limited-edition rum up today!

The nose has aromas of pipe tobacco, charred oak, fruit, and earthy undertones. Wood, honey, vanilla, nutmeg, and a touch of spice with black pepper are on the palate. The finish is reminiscent of bourbon with lingering notes. 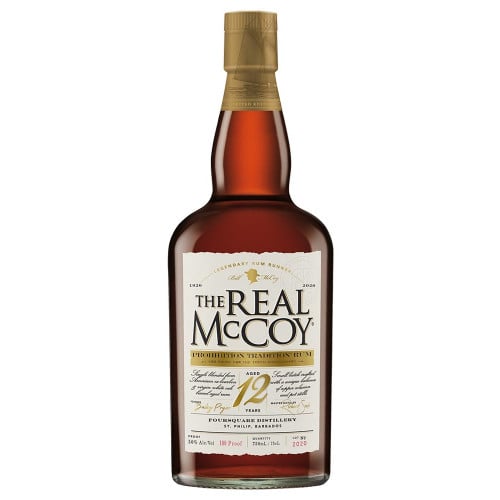