Size750mL Proof86 (43% ABV)
This whisky is expertly blended from 12 unique grain and malt whiskies produced at the Yamazaki, Hakushu and Chita distilleries in Japan. Hibiki Harmony was named the Japanese Whisky of the Year by Whisky Advocate in December 2017.
Notify me when this product is back in stock. 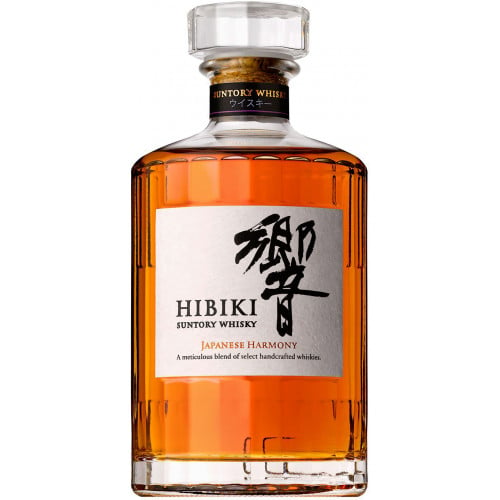 Hibiki Japanese Harmony Whisky is crafted from a blend of more than 12 unique grain and malt whiskies produced at Sutnory’s Yamazaki, Hakushu and Chita distilleries. The blend, which was developed by master blender Shingo Torii and chief blender Shinji Fukuyo, is composed of five key styles — Chita grain whiskey, which serves as the “broth,” malt whiskies aged in American oak casks, sherry casks and Mizunara (Japanese Oak) casks, and finally a smoky malt whisky which adds hidden complexity to the blend.

“Hibiki Japanese Harmony Whisky is a blend that reflects the expert craftsmanship and delicate nature of the Japanese, and it is at once pure and complex,” says Suntory. “There is a transparency of taste that allows this whisky to reveal all of its complexities simultaneously.”

As a result of the expert blending, Hibiki Japanese Harmony Whisky has a slightly floral aroma with additional notes of apricot, orange blossom, marmalade and clove. The palate is dry, with plenty of raisins, honey, pear and cinnamon, and leads to a long, complex finish complete with malt chocolate, oak, pepper, candied apples and a slight hint of smoke.

Each bottle of Hibiki Japanese Harmony Whisky is crafted with 24 facets that represent the 24 seasons of the Japanese lunar calendar.

Slightly floral aroma with additional notes of apricot, orange blossom, marmalade and clove. The palate is dry, with plenty of raisins, honey, pear and cinnamon, and leads to a long, complex finish complete with malt chocolate, oak, pepper, candied apples and a slight hint of smoke.

3.6 out of 5
(3 reviews)
Write a review
Real email address is required to social networks
Sign in
Login with Google
Login with Facebook
Or
We also recommend