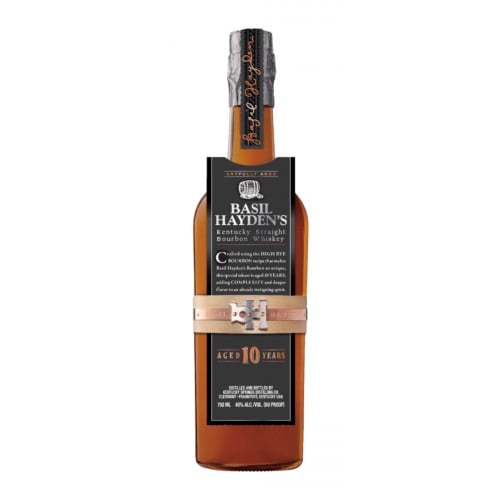 Part of Booker Noe’s Small Batch Bourbon Collection, Basil Hayden’s Kentucky Straight Bourbon Whiskey is named after Basil Hayden Sr., a Maryland Catholic who led twenty-five other Catholic families from Maryland to Nelson County, Kentucky (near Bardstown, home of the Jim Beam) in the late 1700s. In addition to being a religious man — Hayden established the first Catholic church in what is now the Commonwealth of Kentucky — Hayden was also a distiller and a pioneering one at that. While most bourbons at the time was made from a traditional corn base, in 1796 Hayden defied convention by mixing small grains into his mash, believing that the spicy rye flavors would provide a striking complement to the corn’s sweetness. Much to the chagrin of the traditionalist set, Hayden proved to be right.

Basil Hayden’s Kentucky Straight Bourbon Whiskey is made from a mash very similar to the recipe Hayden himself developed in 1796. This 10 Year Old Bourbon features the same high-rye bourbon recipe of the signature Basil Hayden’s, extra aged in the barrels yielding an entirely new layer of complexity and depth of flavor. This beautiful bourbon delivers distinctive whiskey notes with big oak aromas, enhanced by hints of char and vanilla. Basil Hayden’s signature spice perfectly complements the caramel sweetness and toasted oak flavors. Bottled at an inviting 80 proof.

Big oak, hints of char, vanilla, and rye on the nose. The palate is balanced with oak, caramel sweetness and rye spice. The finish is subtly smoky with a slight hint of char.