Rating:
100%
(3)
Bold, intense, yet well-balanced, this expression is a blend of younger and older high-rye whiskeys from Smoke Wagon. The first bring plenty of rye spice, the second a creamy sweetness. It has won a Gold Medal at the San Francisco World Spirits Competition 3 times.

The bottle of this expression is usually made of amber glass, but unfortunately, the producers ran out of it, so the brand started bottling it in clear glass bottles. This was temporary, as clear glass was only used between May and August 2021. There is still a chance that you might receive a bottle different than what is in the picture. Rest assured, the liquid remains the same, regardless of the design.
$63.99
Add to Wish List

They have two brands under their belt now, both with several medals from the San Francisco World Spirits Competition: Silver Dollar American Vodka and Smoke Wagon. The latter comprises several bourbons, including the Smoke Wagon Small Batch Bourbon Whiskey. It's a high-rye bourbon that was aged in hand-picked barrels at the heart of their old warehouse, ensuring the consistency of its flavor. It's a blend of their younger, rye-forward vintages with smoother, creamier, and sweeter older whiskey. Bold and intense, this expression is bottled at 100 proof and has received a Gold Medal at the San Francisco World Spirits Competition in 2016, 2017, and 2020.

The nose has plenty of oak, fruit, and dried apricots. At first, it's sweet on the palate that is well-balanced with spicy white pepper notes. Sweetness and oak are both present, along with hints of caramel, fruit, and rye spice. Finishes exceptionally smooth. 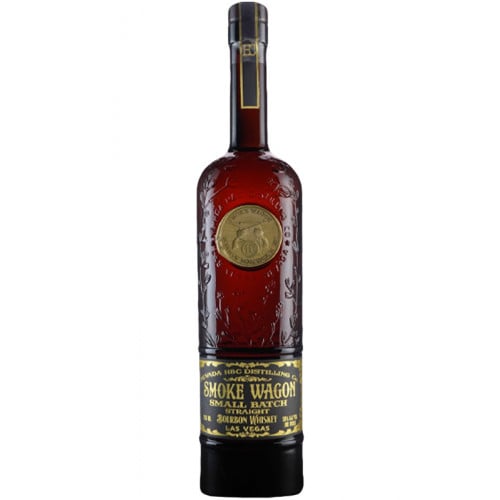