Size750mL Proof90 (45% ABV)
This single malt Japanese whisky is made with 100% malted barley and is distilled through Coffey stills imported from Scotland. 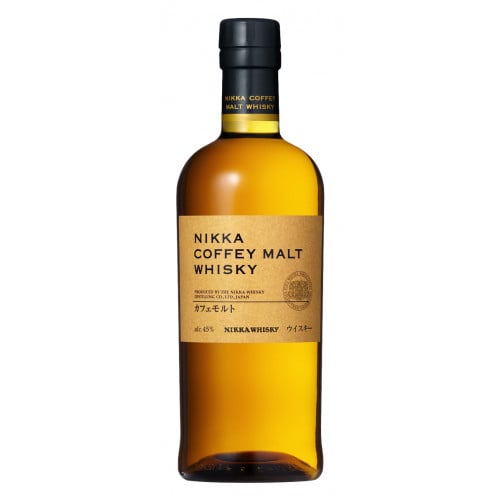 Meticulously crafted at the Miyagikyo Distillery, Nikka Coffey Malt Whisky is a single malt made with 100% malted barley. Once the grains arrive at the distillery, they are milled and mashed before being distilled through copper-pot stills (sometimes called “Coffey” stills) that were imported from Scotland in 1963. As a result of their age and shape, the stills produce a whisky that is more flavorful and complex than modern column stills. Following distillation, the whisky is matured in traditional oak casks.

Nikka Coffey Malt Whisky has an aroma of cinnamon, lemon and butterscotch, which gives way to an intoxicating palate filled with clove, coconut, orange marmalade and oak. The finish is soft, with hints of mint, grapefruit zest and potpourri.

Nikka Coffey Malt Whisky just landed in the U.S. — be sure to pick up a bottle today before it’s all gone!

Aroma of cinnamon, lemon and butterscotch, which gives way to an intoxicating palate filled with clove, coconut, orange marmalade and oak. The finish is soft, with hints of mint, grapefruit zest and potpourri.