Learn more
Size750mL Proof92 (46% ABV) *Please note that the ABV of this bottle may vary
Made from a blend of bourbon, rye and scotch, this whiskey was rated "one of the top ten spirits you've never tried."
Notify me when this product is back in stock.

This product is available in: AZ, IL, MO, TX Unfortunately, we can't ship to PO Boxes and APO addresses. 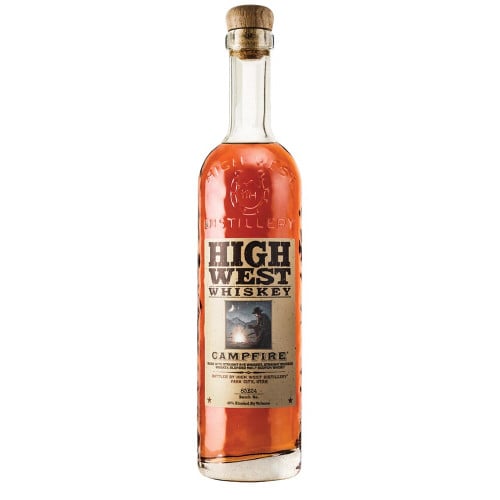 "After a tour of a distillery in Scotland," says Perkins, the owner of High West Distillery, "we went out to dinner and they brought us a dessert of honeydew drizzled with peated syrup. That was the most unusual, delicious and memorable ending to a dinner I've ever had." Inspired by the sweet and smoky flavor profile of his Scottish dessert, Perkins concocted a diabolical scheme to create the same balance of flavors at his distillery in Park City, Utah.

High West Campfire is Perkin's attempt to create a whiskey that pays homage to that dessert. The whiskey is made from a secret blend of six-year old bourbon (made from a mash of 75% corn, 20% rye and 5% malted barley), five-year old rye (made from a mash of 95% rye and 5% barley) and lightly peated eight-year old Scotch (made from 100% malted barley). As a result, it has a unique flavor profile — the rich and sweet flavors of the bourbon are well-balanced by notes of spicy rye and complemented by a touch of smoke. "We got it exactly right," says Perkins of the whiskey.

The whiskey earned a score of 91 points from Wine Enthusiast, which said to "gift a bottle to a Scotch lover to introduce the joys of American whiskeys." The whiskey was also rated "one of the top ten spirits you've never tried" by Complex Magazine, and was "highly recommended" by Serious Eats.

"I'm a whiskey guy." says Perkins, who was named Whiskey Advocate's Whiskey Pioneer of the Year in 2011. "I wanted High West to be a Western brand. A Rocky Mountain brand. That was important to me."

Well-balanced flavors of sweet bourbon, roasted nuts and fresh corn with notes of spicy rye, oak and baking spices. Finish is smooth and long, with touches of peaty smoke.