Learn more
Size750mL Proof80 (40% ABV) *Please note that the ABV of this bottle may vary
The Glenrothes Sherry Cask Reserve is blended from rare and limited vintages at The Glenrothes Distillery, each aged exclusively first-fill ex-Oloroso Sherry casks custom made in Jerez, Spain. It was awarded "Five Stars" and Highest Recommendation from D. Paul Pacult's Spirit Journal in 2015.
Notify me when this product is back in stock. 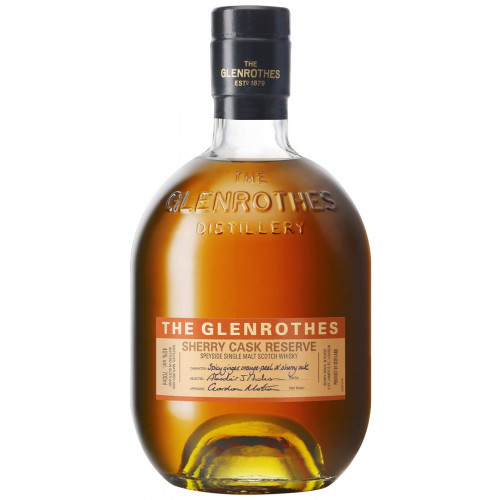 The whisky has a complex aroma of lemon cake, Christmas cookies, fresh pear and vanilla, which leads to an equally bold palate filled with notes of gingerbread, oak, flan and baking spices. The finish, which is bitter and nutty, is complete with memorable notes of orange zest.

The Glenrothes is an award-winning Speyside single malt of exceptional quality and a pioneer in the Scotch whisky industry. All our Single Malt is Vintage Whisky. And when we say Vintage, we don't just mean aged; we mean whisky distilled in a particular year that has reached its peak of maturity, character and flavor. At which point, we have a choice to make: to either bottle these rare and finite expressions as Single Vintages, or marry them together in perfect harmony to create one of our exquisite Reserves.

Complex aroma of lemon cake, Christmas cookies, fresh pear and vanilla, which leads to an equally bold palate filled with notes of gingerbread, oak, flan and baking spices. The finish, which is bitter and nutty, is complete with memorable notes of orange zest.