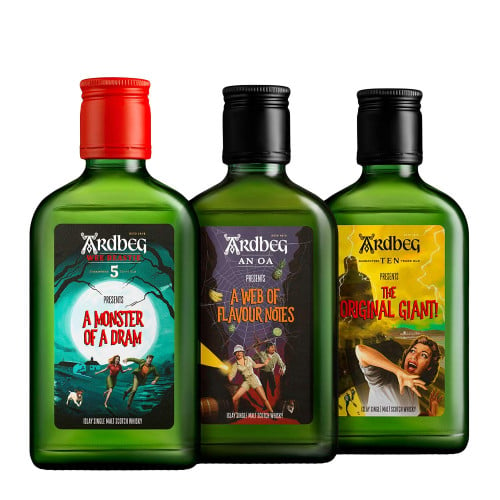 About Ardbeg The Three Monsters of Smoke Gift Set

This gift set features 3 Ardbeg whiskies from their permanent range: the classic Ardbeg 10, the recently added 5-year-old Ardbeg Wee Beastie, and Ardbeg An Oa. These are all non-chill filtered and each comes in a 20 cL bottle with a unique artwork that is hidden beneath the removable label. The 10 is Ardbeg's flagship, Wee Beastie is a unique and youthful whisky with the addition of sherry casks, while the An Oa employs 3 different casks in its maturation process. It's the perfect gift for a budding Scotch lover or anyone that's curious about the wonders of peated whiskey.

Delve into the smoky side of Scotch with this gift set today!

Ardbeg 10: Rich aromas of ocean air, taffy, and unmistakable peat smoke, which are balanced by softer elements of vanilla and lemon zest on the palate. The mildly sweet finish is nicely seasoned with malt grain, espresso, and chocolate-covered almond notes.

Ardbeg Wee Beastie: The nose is bright with herbal, vanilla, pear, black pepper, and honeyed ham notes. There's some coffee and pine resin in there as well. The palate brings chocolate, smoked bacon, eucalyptus, and aniseed to the table. Finishes long and briny with lingering cocoa and cured meat notes.