Size750mL Proof80 (40% ABV)
The 18-year-old blended "double aged" Dewar's is an exceptionally smooth award-winning dram with a rich profile that includes fruity, dark chocolate, and marzipan notes.
Notify me when this product is back in stock. 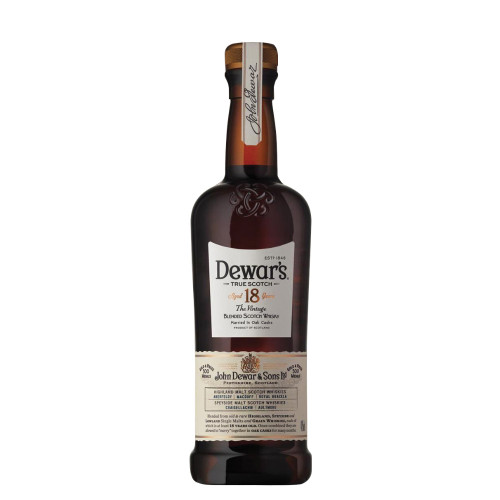 The 18-year-old expression in Dewar's premium Blended Scotch Whisky range is aged at least 18 years in oak casks. It is then blended and finished, letting the flavors and aromas marry ― hence the term "double aged". The finished whisky has a smooth and rich profile with fruity, dark chocolate, and marzipan notes and is bottled at 80 proof. It has garnered numerous accolades, including at the San Francisco World Spirits Competition.

The nose leads with fruity notes of apples and cooked pears, before being joined by vanilla, toasted almonds, and malt. More fruit is on the palate with honey and caramel notes as well. A peppery spice rounds it all up. Culminates in a sweet and creamy finish with fruity, nutty, as well as spicy notes lingering.