Size750mL Proof84 (42% ABV)
This characterful Jura is a blend of whiskies from first-fill ex-bourbon American White Oak, Vosges, Bertranges, Jupilles, Allier, Tronçais & Limousin barrels.
Notify me when this product is back in stock. 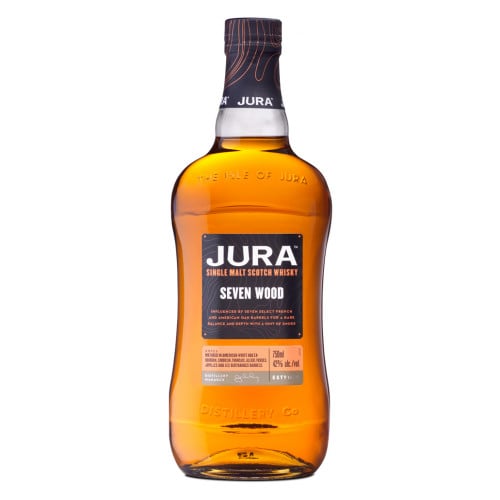 The Isle of Jura Distillery was founded in 1963. It is the only distillery on the Isle of Jura, which dates back to 1810 as being the first licensed distillery on Jura. The distillery sources its water from Loch a’Bhaile-Mhargaidh and is owned by independent bottlers Whyte & Mackay. Situated sixty miles off the western coast of the Scottish mainland, the Isle of Jura is one of the most sparsely populated islands in Scotland — it boasts 5,000 red deer, 200 human beings, two churches and just one distillery.

Jura Single Malt Scotch Whisky is made from Scottish barley, which is milled at the distillery and mashed with hot water to release its natural sugars. Once the barley has been mashed, it is fermented and then distilled through Jura's 28-foot tall copper-pot stills. Jura malts are typically aged in bourbon casks, with some whiskies being finished in sherry. Their whiskies are really said to come of age around 16 years; this is when the whisky really starts to shine.

This exciting and new line of Jura whiskies can be described as a hybrid of Highland and Island styles, a harmony that imparts a sweet smokiness onto the spirit. A departure from Jura's signature house style of whisky, this Jura 7 Wood is crafted from a combination of seven different oak casks, yielding a remarkable depth of flavor. Taking the art of blending to a whole new level, Jura’s Master Blender has showcased his expertise by utilizing several different kinds of oak woods: first-fill ex-bourbon American White Oak, Vosges, Bertranges, Jupilles, Allier, Tronçais & Limousin barrels. Expect abundant notes of coffee, ginger, peaches, a hint of sea spray and smoke.

An aromatic fusion of coffee, ginger spice and a hint of milk chocolate on the nose. Caramelized peach, chewy licorice and candied orange with a hint of sea-spray and smoke.