Size750mL Proof80 (40% ABV)
The award-winning Glenrothes Bourbon Cask Reserve Single Malt Scotch Whisky has won Double Gold Medal at the WSWA Tasting Competition in 2016, a Double Gold Medal at the 2018 San Francisco World Spirits Competition, and received 95 Points (Extraordinary, Ultimate Recommendation) at the 2015 Ultimate Spirits Challenge. It combines the best of both the American and Scotch whisk(e)y industries.
Notify me when this product is back in stock. 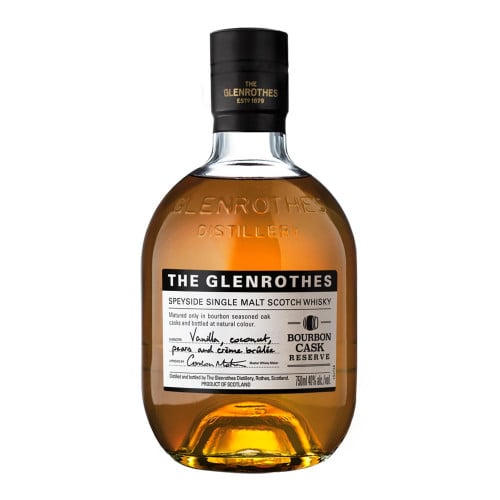 Matured exclusively in American oak ex-Bourbon casks, the Bourbon Cask Reserve is an exceptional single malt Scotch whisky. It delivers coconut and vanilla in abundance and is soft and mellow with a white peach flavor. Certified kosher.

The Glenrothes is an award-winning Speyside single malt of exceptional quality and a pioneer in the Scotch whisky industry. All our Single Malt is Vintage Whisky. And when we say Vintage, we don't just mean aged; we mean whisky distilled in a particular year that has reached its peak of maturity, character and flavor. At which point, we have a choice to make: to either bottle these rare and finite expressions as Single Vintages, or marry them together in perfect harmony to create one of our exquisite Reserves.

Pale straw, clear and bright coloring. The bouquet has fresh, floral notes, coconut, American oak with notes of lilac mingling with scents of vanilla and white peach. The palate is soft and mellow with notes of baked custard, chamomile and berry fruits. The finish is medium length, smooth and sweet.