Size750mL Proof86 (43% ABV)
Aged for 25 years, this whisky earned a score of 95 points from the Beverage Testing Institute.
Notify me when this product is back in stock. 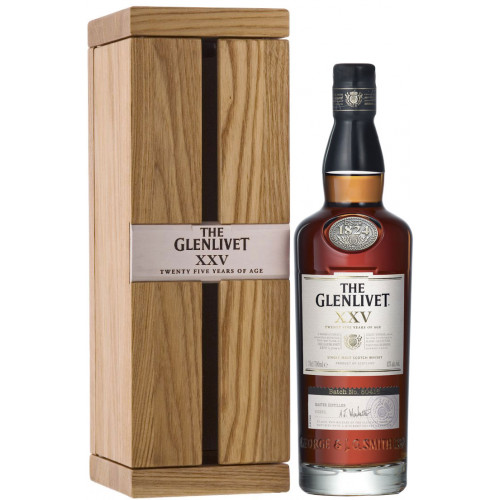 Following distillation, The Glenlivet XXV is aged for approximately 23 years in traditional oak casks. After its initial maturation, the whisky is double barreled, or finished, in hand-selected, first-fill sherry casks for an additional two years. The sherry casks impart a luxurious and bold aroma of ripe fruits, dark chocolate and creamy vanilla to the whisky. In addition, the sherry casks contribute hints of raisins, dates and figs, which complement the whisky's notes of walnuts, brown sugar and cinnamon. The finish is long opulent, with notes of sherry, red fruits and spices mingled together.

Glenlivet XXV earned the Gold Medal at the International Spirits Challenge, the International Wine & Spirits Competition and the The Scotch Whisky Masters Competition. In addition, it earned a score of 93 points from Whisky Advocate, which said that the whisky's "flavors are seamless and elegantly balanced." It also earned a score 95 points from the Beverage Testing Institute.

Each bottle of Glenlivet XXV Single Malt Scotch Whisky is encased in a wooden box that is reinforced with limestone and brushed steel.

Aroma of ripe fruits, dark chocolate and creamy vanilla. Hints of raisins, dates and figs on the palate, which complement notes of walnuts, brown sugar and cinnamon. Finish is long and opulent, with notes of sherry, red fruits and spices mingled together.