Be the first to review this product
The “purest” expression of The Glenlivet, this whisky is drawn from casks of American White Oak which have never before been used to mature Scotch whisky.
$91.99
Add to Wish List

During the early 19th century, illegal distilleries were commonplace throughout the Speyside region of Scotland. In 1823, however, Alexander Gordon pushed the Excise Act of 1823 through Parliament. The Excise Act allowed illegal distillers throughout Scotland to apply for and obtain licenses to legally distill spirits. In 1824, a businessman named George Smith applied for one of the first licenses in the Speyside region of Scotland and opened the doors to The Glenlivet Distillery. For nearly two centuries, The Glenlivet Distillery has been producing the “single malt whisky that started it all.”

Following distillation, The Glenlivet Nàdurra First Fill Selection Single Malt Scotch Whisky is drawn from casks of American White Oak, which have never before been used to mature Scotch whisky. The technique of using virgin casks has been in favour with distillers at The Glenlivet since the early 1900s, and according to the distillery, the Nàdurra is the purest expression of The Glenlivet.

The untouched oak imparts a nose of creamy vanilla and sweet pears to this whisky, and contributes to a palate filled with notes of tropical pineapple and ripe bananas. The finish is medium-bodied and refreshing, making the Glenlivet Nàdurra First Fill Selection Single Malt Scotch Whisky perfect to drink straight or in a cocktail.

Bottled at cask strength, The Glenlivet Nàdurra First Fill Selection Single Malt Scotch Whisky is a brand-new expression from a distillery with an incredibly rich tradition.

Pick up a bottle of your Glenlivet today!

Nose of creamy vanilla and sweet pears, along with a palate filled with notes of tropical pineapple and ripe bananas. The finish is medium-bodied and refreshing. 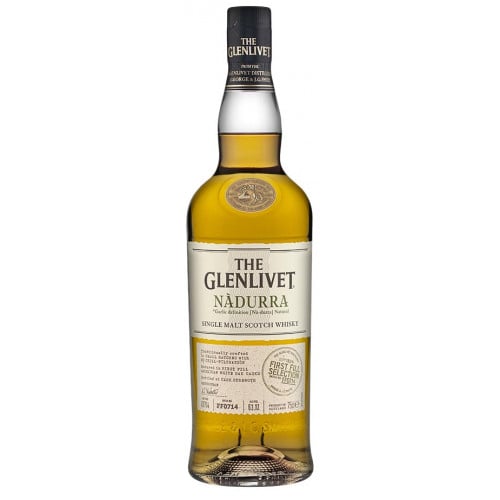