Size750mL Proof97.4 (48.7% ABV)
This spicy, limited-edition single malt was aged in American oak and Oloroso Sherry casks and was personally selected by The Glenlivet Guardians.
Notify me when this product is back in stock. 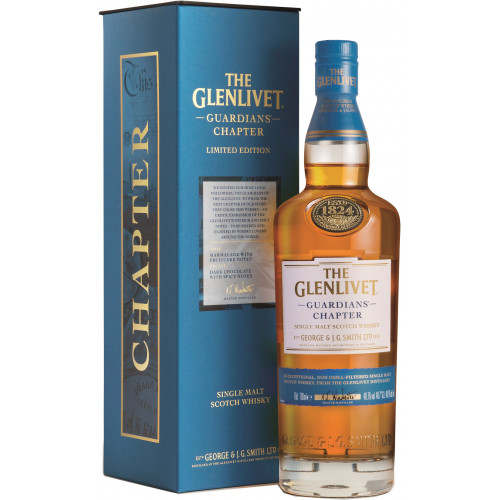 The malt chosen was aged in a combination of American oak and Oloroso Sherry casks and has a distinctly spicy character. On the nose, The Glenlivet Guardians’ Chapter Single Malt Scotch Whisky has rich notes of fruitcake, candied apples and orange marmalade, which lead to tastes of juicy raisins and dark chocolate on the palate. The finish is accented by tangy orange zest and an underlying spiciness reminiscent of cinnamon toast.

The Glenlivet Guardians’ Chapter Single Malt Scotch Whisky is a limited release which will only be available for a short time — pick up a bottle today!

Distinctly spicy character. On the nose, rich notes of fruitcake, candied apples and orange marmalade, which lead to tastes of juicy raisins and dark chocolate on the palate. The finish is accented by tangy orange zest and an underlying spiciness reminiscent of cinnamon toast.