Size750mL Proof80 (40% ABV)
This limited-edition release marks the first time that the First Fill is released in the US. It's a classic Speyside whisky that was aged exclusively in first-fill American oak casks for 12 years, before being bottled at 80 proof.
Notify me when this product is back in stock. 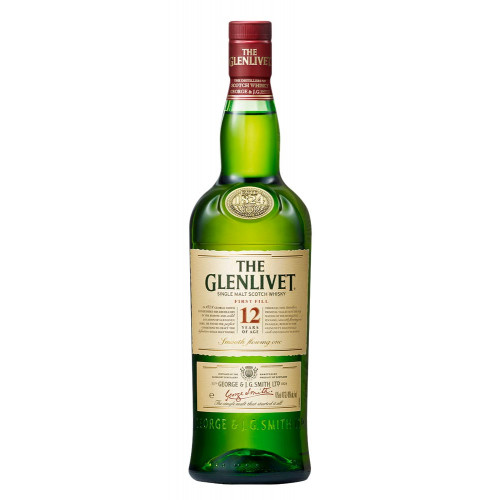 After the barley has been fermented, it is distilled twice — first through Glenlivet's wash still, and then again through Glenlivet's spirits still. Originally designed by George Smith, the copper-pot stills have a unique, lantern-like shape, which encourages contact between the whisky and the copper (the copper strips the whisky of any impurities it may have, and provides for a lighter and more pure flavor profile). In addition, the height of the stills ensures only the lightest vapors are condensed, and makes for a more delicate and elegant whisky.

This expression is a limited-edition release that differs from their regular 12-year-old offering. Instead of a mixture of cask types, this one has spent its dozen years in first-fill American oak exclusively. The resulting spirit is smooth and creamy with wood, vanilla, cereal, nutty, and spice notes. It marks the first time that the First Fill was released in the US.

The nose opens with vanilla and woody aromas, along with a touch of nuttiness and floral notes. It's smooth and creamy on the palate with cereal, vanilla, fruit, and a touch of spice. The finish is oaky and nutty with hints of spice.