Size750mL Proof86 (43% ABV)
Arran’s Barrel Reserve is a fresh, light and elegant single malt, matured in Bourbon barrels. Bottled with no age statement at 43% ABV, this smooth and fruity expression is a dram for every occasion – to be served neat, with ice or in a longer drink or cocktail.
Notify me when this product is back in stock. 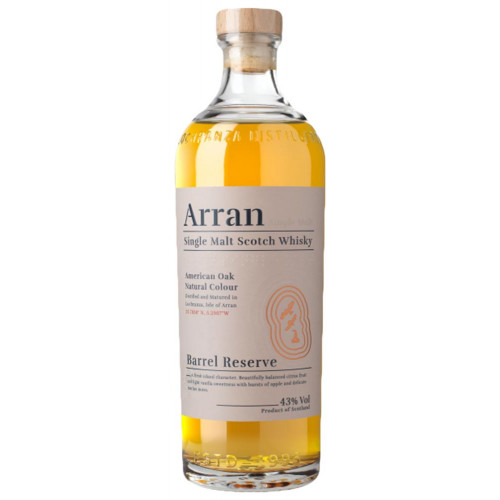 Arran’s Barrel Reserve is a fresh, light and elegant single malt, matured in Bourbon barrels. It is bottled at 43% ABV with no age statement. This smooth and fruity expression is a dram for every occasion – to be served neat, with ice or in a longer drink or cocktail.

Delicate nose has notes of apples and pears. The beautifully balanced palate has citrus fruit and light vanilla sweetness with a burst of apple and delicate marine notes. The finish is sweet and spicy, with hints of charred oak, citrus and vanilla.