Size750mL Proof80 (40% ABV)
Haig Club Clubman is a modern single grain Scotch whisky matured exclusively in ex-Bourbon casks. This wonderfully smooth, sweet and enjoyable whisky was launched in 2014 as a collaboration between David Beckham and Diageo.
Notify me when this product is back in stock. 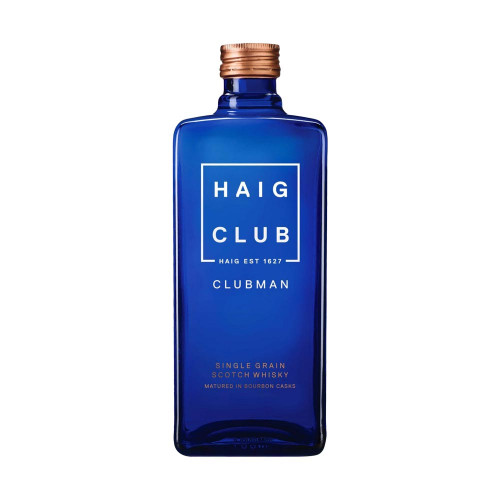 The story of Haig Club goes back to 1627, when Robert Haig began distilling in Scotland, however it wasn’t until almost two centuries later that John Haig established the Cameronbridge distillery. A firm believer in progress, John Haig installed at the distillery what at the time was almost unheard-of technology: continuous column stills that set out his vision for quality blends through innovation, new technology and creativity. Cameronbridge became the first distillery to produce grain whisky using the column still method invented by John's cousin Robert Stein, laying the foundations for the growth and success of the modern Scotch Whisky industry. In 1865, John and eight other grain distillers formed an alliance, and in 1877 Distillers Company Limited (DCL) was formally established. Through time DCL evolved into Diageo, the world's largest spirits company.

Today, Cameronbridge is the largest grain distillery in Europe and Diageo’s only wholly-owned grain plant. Staying true to its 200 years of distilling tradition to sit at the very forefront of technical expertise and skill, the distillery takes a 21st Century approach to distilling. Cameronbridge recycles all the by-products from the distillation process (grain water and yeast) to produce enough power to run itself. Its custom-made stills run continuously 24 hours a day, seven days a week.

Haig Club Clubman is a modern single grain Scotch whisky designed for a new generation of whisky drinkers. This expression is matured exclusively in ex-Bourbon casks, which add vanilla, butterscotch and sweet toffee flavors to Cameronbridge’s gentle single grain whisky, creating a wonderfully smooth, sweet and enjoyable whisky. Launched in 2014 as a collaboration between David Beckham and Diageo, this whisky is designed to be different, stylish and modern whilst incorporating nearly 400 years of the Haig heritage. The inspiration for the name came from advertising materials from the 1920s or the golden era of cocktails, when Haig was advertised as "The Clubman's Whisky".

The nose has notes of sweet toffee, popcorn, coconut and butterscotch balanced by some zesty citrus and crisp, green apple. The palate is creamy, with hints of toffee, maple syrup, salted caramel and Crème brûlée, complimented by freshness of apple, lemon and mint. The finish is smooth and clean with subtle caramel and maple syrup sweetness, and a lingering hint of cinnamon.