Be the first to review this product
This Irish-American whiskey is a blend of mostly 4-6-year-old spirits that were aged in a combination of ex-bourbon, sherry, and port casks. It has won a Gold Medal at the 2020 edition of the New York International Spirits Competition.
$37.99
Add to Wish List

The Fighting 69th is a famous infantry regiment of the US Army from New York City that has played a part in the Civil War, both World Wars, Iraq, and Afghanistan since its inception in 1849. Nicknamed "The Fighting Irish", this Irish heritage unit is the most honored unit in US military history. It's known for leading the New York City St. Patrick's Day Parade each year. Paying tribute to the unit, $1 from each bottle of whiskey sold goes to the non-profit Sixty-Ninth Regiment Historical Trust.

"Authentically Irish, Uniquely American", the Fighting 69th Irish Whiskey is a blend of pot-still and column-still whiskey with barley, a high percentage of malted barley, and corn all featured in the mash bill. The spirits are aged in single and double char casks that used to hold bourbon, as well as port and Oloroso sherry casks. Aged mostly 4 to 6 years, the complex blend is super-smooth with notes of apple, pear, caramel, butterscotch, baked bread, cinnamon, and allspice. This expression has received a Gold Medal at the New York International Spirits Competition as well as a Silver Medal at the San Francisco World Spirits Competition in 2020.

The Irish-American whiskey has notes of apple, pear, caramel, butterscotch, baked bread, cinnamon, and allspice. The complex spirit finishes super-smooth and malty with a touch of spice. 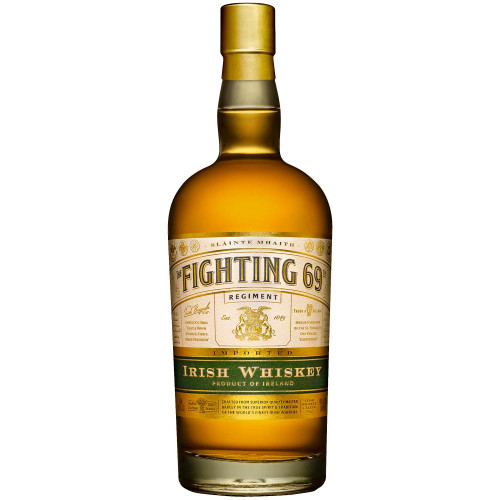