Size750mL Proof80 (40% ABV)
This triple-distilled, bottle of Irish heritage won the top prize in its category at the World Whiskies Awards.
Notify me when this product is back in stock. 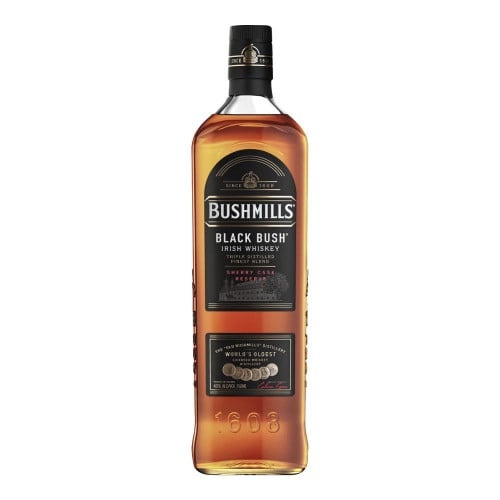 The United States was a very important market for Bushmills (as well as other Irish Whiskey producers) in the 20th century. In 1920 when Prohibition hit, the Irish Whiskey industry suffered a massive blow, that Bushmills resiliently managed to survive. This was largely due in part to Wilson Boyd -Bushmills’ director at the time- who (predicting the end of Prohibition) made the intsightful decision to rack up large stores of whiskey ready to export.

The distillery was purchased by Isaac Wolfson at the end of World War II. Then the Irish Whiskey industry dried to a trickle. Bushmills was one of only two distilleries in Ireland in 1972, until it was taken over by Irish Distillers. This gave Irish Distillers complete control of whiskey production in Ireland. In June 1988, Irish Distillers was bought by French liquor group Pernod Ricard, and then in June 2005, the distillery was bought by Diageo. Bushmills is now in the hands of Jose Cuervo, and celebrated its 400th anniversary in 2008.

Black Bush is a triple-distilled, malt blend of 80% malt whiskey to 20% grain whiskey. This Irish Whiskey is matured in for around 8-10 years in former Oloroso Sherry casks, with rich, smooth notes of fruit, this dram is full of character and history. Bottled at 40% ABV, the blend won the top prize in its category at the World Whiskies Awards.

Sherry on the nose, with baking spices, apple, a hint of grain, and earthiness. On the palate is more sherry flavor, with hints of cinnamon, honey, some pears, nuttiness, and a bit of smoke and wood. The finish is medium-length with a bit of bite, grains, and sherry tannins.