Size750mL Proof111.4 (55.7% ABV)
Aged for twelve years in ex-bourbon barrels, this one-of-a-kind Irish whiskey is finished in ex-White Port barrels from the Carcavelos region of Portugal.
Notify me when this product is back in stock. 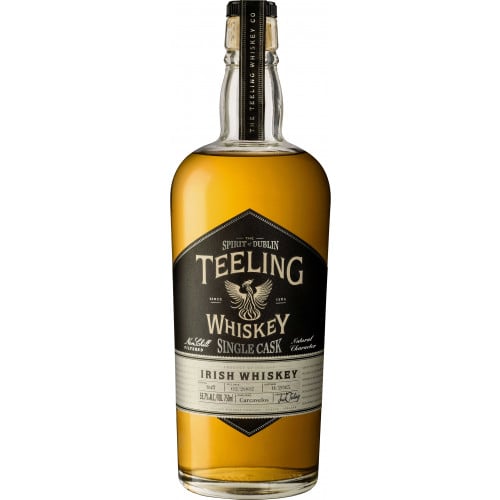 In 1782, Walter Teeling opened a distillery along Marrowbone Lane in Dublin, Ireland. At the time, nearly 40 independent distilleries dotted the rolling Irish landscape, the majority of which were centralized in the industrial engine room of the city — the Liberties. "Since 1782 the Teeling family has been crafting Irish Whiskey," says Jack Teeling, the founder of the Teeling Whiskey Company. "The entrepreneurial spirit that inspired Walter Teeling back in the 18th century has not been diluted over the years and the latest generation of Teelings are committed to innovating and creating unique Irish whiskeys."

For St. Patrick’s Day, 2016, Teeling unveiled its Single Barrel bottling program, which consists of twelve individual casks of Teeling’s Single Malt Irish Whiskey, each aged in a distinctive type of wood. Caskers recently secured a limited quantity of bottles from one such cask, Teeling’s Carcavelos Barrel Aged Single Cask Irish Whiskey. The whiskey was first aged for twelve years in ex-bourbon barrels before being finished in ex-White Port barrels from the Carcavelos region of Portugal, which is famous for producing beautifully light and fragrant, fruity flavors.

As a result, Teeling Carcavelos Barrel Aged Single Cask Irish Whiskey has a straw gold color and an aroma of honeydew melon, white grapes and mint. The palate is packed with bold notes of shortbread, coffee and apple butter and leads to a finish accented by long, sweet hints of port wine and cake batter.

Each bottle of Teeling’s Carcavelos Barrel Aged Single Cask Irish Whiskey is numbered, hand filled and bottled in its most natural form at cask strength.

Straw gold color and an aroma of honeydew melon, white grapes and mint. The palate is packed with bold notes of shortbread, coffee and apple butter and leads to a finish accented by long, sweet hints of port wine and cake batter.