This product is available in: DC, NH, NJ, NY, WA Unfortunately, we can't ship to PO Boxes and APO addresses.

Size750mL Proof108 (54% ABV)
This cask strength Irish whiskey was awarded 94.5 points in Jim Murray’s Whisky Bible.
Notify me when this product is back in stock.

This product is available in: DC, NH, NJ, NY, WA Unfortunately, we can't ship to PO Boxes and APO addresses. 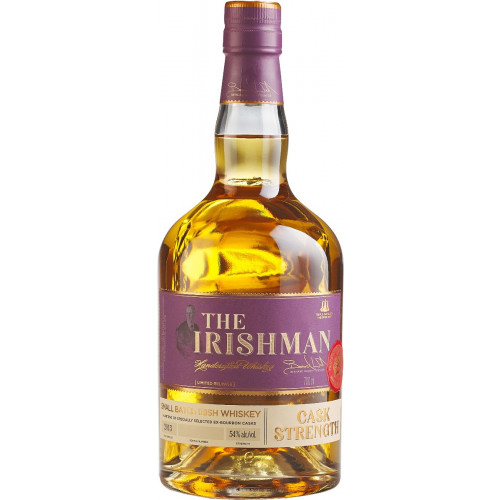 Situated deep within the Carlow countryside, the Urglin Glebe House is over two centuries old and the headquarters of the Irish Whiskey Co. The company was founded by Bernard and Rosemary Walsh, who had previously owned a ski chalet in France and were in search of the perfect Irish whiskey with which to spike their famous coffee. Eventually, their search led them to opening up their own distillery.

The Irishman Cask Strength Irish Whiskey is made from a vatting of aged The Irishman Single Malt and aged The Irishman Single Pot Still whiskeys, each of which is crafted from Irish barley (the long summer days in Ireland, along with the mild and wet winters, are ideal for growing barley). After the barley has been malted, it is mashed and fermented before being distilled three times through copper pot stills and ultimately laid to rest in ex-bourbon American Oak casks.

Each year, Bernard Walsh scours the distillery’s cellars to hand-select a number of exceptional casks which are then blended together to create The Irishman Cask Strength Irish Whiskey.

As a result, the whiskey has an aroma of delicate malts, bourbon and ginger. Notes of oak, caramel and baking spices dominate the palate, and lead to a rich finish touched by honey and fudge.

The Irishman Cask Strength Irish Whiskey won the Gold Medal at the Whiskey Masters and was awarded 94.5 points in Jim Murray’s Whisky Bible. The 2014 bottling is limited to less than 3,000 bottles and comes in at a robust 108 proof.

Aroma of delicate malts, bourbon and ginger. Notes of oak, caramel and baking spices dominate the palate, and lead to a rich finish touched by honey and fudge.