Size750mL Proof80 (40% ABV)
This 15-year-old Irish Whiskey was aged in special ex-rum casks never before used by Tullamore DEW Distillery.
Notify me when this product is back in stock. 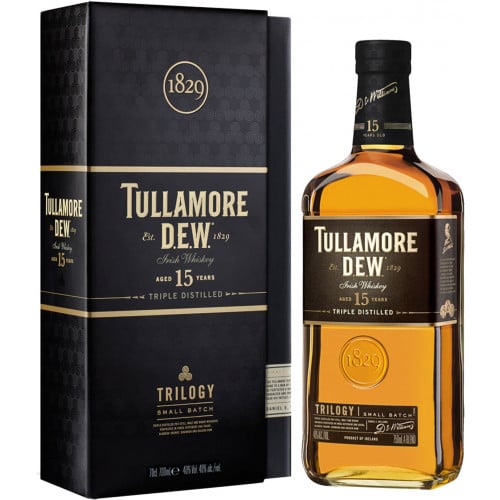 Situated in the Midlands region of Ireland, the city of Tullamore was ruled for centuries by Clan O'Molloy. On May 10, 1785, a hot air balloon crashed into the city and began a fire that destroyed over 100 homes, making Tullamore the site of the world's first known aviation disaster. Following the accident, the city adopted a phoenix (a phoenix is a mythological Greek bird that is reborn after it dies) rising from the ashes as its coat of arms, a symbol of its resilience and recovery.

Tullamore DEW Distillery was founded within 50 years of the accident, and is situated at the very site where the hot air balloon struck a smoking chimney, which started the fire.

Following distillation, Tullamore DEW Trilogy Irish Whiskey is aged for 15 years in a combination of ex-bourbon, ex-Oloroso Sherry and special ex-rum casks, making this both the oldest whiskey ever released by Tullamore DEW and the first time the distillery has used rum casks in such a way. As a result, Tullamore DEW Trilogy has a rich aroma filled with tropical fruits, mixed nuts, tannins and oak. The palate transitions to flavors of chocolate fudge and whipped cream, and leads to an incredibly long and intense finish.

Tullamore DEW Trilogy Irish Whiskey shows the power of three in many ways — three generations of the Williams family, three types of Irish whiskey (malted barley, unmalted barley and grain), the distinctly Irish process of triple-distillation, the unique crafts of distillation, blending and maturation, and aging in three different types of casks.

Pick up a powerful whiskey today!

Rich aroma filled with tropical fruits, mixed nuts, tannins and oak. The palate transitions to flavors of chocolate fudge and whipped cream, and leads to an incredibly long and intense finish.