Learn more
Size750mL Proof110.6 (55.3% ABV) *Please note that the ABV of this bottle may vary
Launched in 2018, this whiskey is Jameson ’s rarest release and is bottled once per year, at cask strength.
Notify me when this product is back in stock.

This product is available in: DC, NV, TX Unfortunately, we can't ship to PO Boxes and APO addresses. 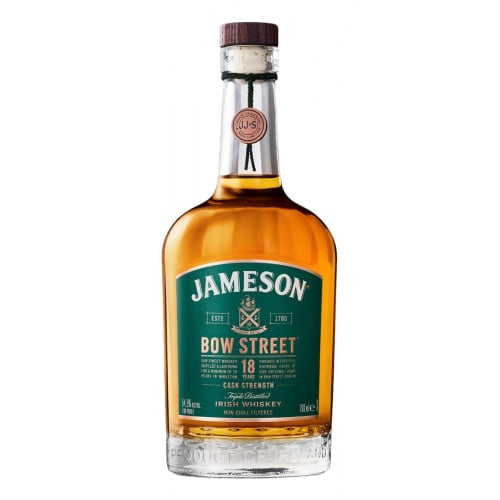 Jameson Bow Street 18 Years is a special blend of rare pot still and grain Irish whiskeys produced at the Midleton distillery. After maturing for almost two decades, these whiskeys are married together, before being finished at the Jameson Distillery Bow Street in Dublin. Launched in 2018, this whiskey is Jameson’s rarest release and is bottled once per year, at cask strength.

Rich wood-driven influence with deep toffee notes and spice on the nose. The palate has notes of toffee and oak with hints of leather and vanilla along with a subtle sherry nuttiness creating depth and complexity. The finish is lingering and full with the sweet toffee notes slowly fading while the toasted oak and spice linger throughout until the very end.

3.4 out of 5
(1 reviews)
Write a review
Real email address is required to social networks
Sign in
Login with Google
Login with Facebook
Or
We also recommend