Size750mL Proof80 (40% ABV)
A blend of whiskies aged in American bourbon barrels and European oak casks, before finally being finished in first fill bourbon barrels, this whiskey earned a score of 95 points from Wine Enthusiast. 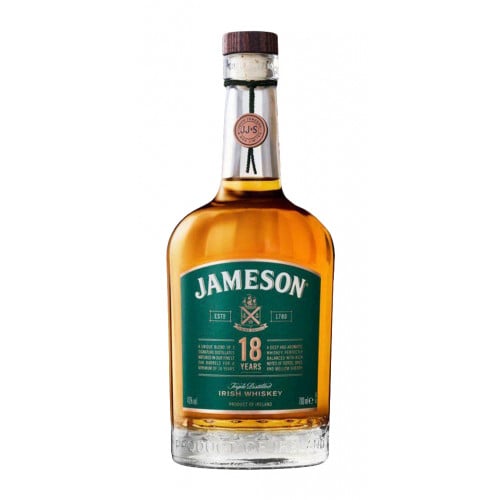 You'd be hard-pressed to find a more iconic name in the Irish whiskey world than "Jameson ." The Jameson tradition dates all the way back to 1740, when John Jameson was born into a family whose motto, "Sine Metu"("Without Fear"), was earned through the family's courage in fighting pirates on the high seas during the 1500s.

Jameson Irish Whiskey is crafted from a mash of malted and unmalted barley that is triple-distilled — just as it was by John Jameson himself centuries ago — through three separate copper-pot stills: a wash still, feint still and finally a spirit still. The mash itself is made using barley, maize and pure Irish water, further adding to the unique character of the whiskey.

Jameson 18 Year Old Triple Distilled Irish Whiskey is a special blend of three whiskies that have each aged at least 18 years in hand-selected American bourbon and European oak casks in Jameson's Midleton warehouse. As a result of its 18 year beauty rest, the whiskey's nose opens with spicy oak and toffee, which is followed by more toffee and fudge notes on the palate, as well as subtle hints of sherry. Just before being bottled, the whiskey is finished in first-fill bourbon casks, which leads to a smooth, vanilla finish, brightened by previous notes of toffee and caramel.

Pick up a bottle of this rare and limited bottle of Jameson today!

Nose opens with spicy oak and toffee, which is followed by more toffee and fudge notes on the palate, as well as subtle hints of sherry. The bourbon cask finishing leads to a smooth, vanilla finish, brightened by previous notes of toffee and caramel.